INTENSE RAINFALL in a VERY DANGEROUS thunderstorm near Lake Macquarie and Olney Forest.

The Bureau of Meteorology warns that, at 10:40 am, very dangerous thunderstorms were detected on the weather radar near Dooralong, Freemans Waterhole, Brightwaters, the Watagan Mountains west of Cooranbong, Dora Creek and Mannering Park. Very dangerous thunderstorms are forecast to affect Yarramalong, Doyalson and Warnervale by 11:10 am and Bucketty, Mangrove Mountain, Wyong, the area between Wollombi and Bucketty, Mangrove Creek Dam and Tuggerah by 11:40 am.

Other severe thunderstorms were detected on the weather radar near Mount White, Patonga, Spencer, Brooklyn, Maroota and Wisemans Ferry. They are forecast to affect Colo, the Parr State Recreation Area, Berowra, Cattai and Glenorie by 11:40 am.

Intense rainfall that may lead to dangerous and life-threatening flash flooding is likely.

The State Emergency Service advises that people should:
* Keep clear of creeks and storm drains.
* Don't walk, ride your bike or drive through flood water.
* If you are trapped by flash flooding, seek refuge in the highest available place and ring 000 if you need rescue.
* Unplug computers and appliances.
* Avoid using the phone during the storm.
* Stay indoors away from windows, and keep children and pets indoors as well.
* For emergency help in floods and storms, ring the SES (NSW and ACT) on 132 500. 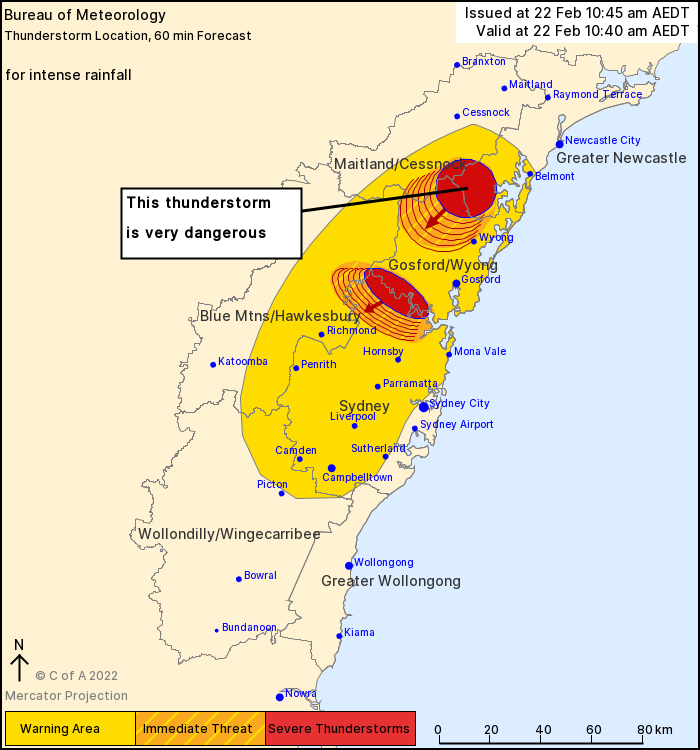