Weather Situation: A trough and associated dryline will continue to aid severe thunderstorm development for the remainder of the afternoon period and into the evening.
Severe thunderstorms are likely to produce damaging, locally destructive winds, large, possibly giant hailstones and heavy rainfall that may lead to flash flooding over the next several hours in parts of the Upper Western district. Locations which may be affected include Lightning Ridge, Collarenebri, Goodooga and Weilmoringle.

Severe thunderstorms are likely to produce damaging winds, large hailstones and heavy rainfall that may lead to flash flooding over the next several hours in the Central West Slopes and Plains and parts of the North West Slopes and Plains, Lower Western and Upper Western districts. Locations which may be affected include Walgett, Dubbo, Coonamble, Nyngan, Lightning Ridge and Brewarrina.

Severe thunderstorms are no longer occurring in the Riverina district and the warning for this district is CANCELLED.
- 61mm was recorded at Nyngan around 2pm. 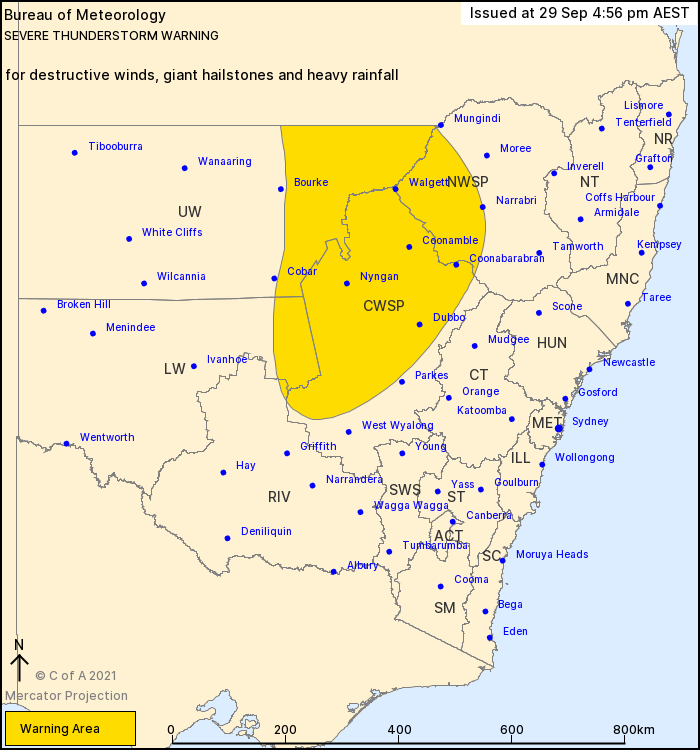