Weather situation: A dynamic cold front associated with a deep low pressure system in SA is tracking east across the state today. This system will result in the development of severe thunderstorms across eastern NSW as the day progresses.

Severe thunderstorms are likely to produce damaging winds, large hailstones and heavy rainfall that may lead to flash flooding over the next several hours in the Mid North Coast, Hunter, Metropolitan, Illawarra, Northern Tablelands and parts of the South Coast, Central Tablelands, Southern Tablelands and North West Slopes and Plains districts. Locations which may be affected include Port Macquarie, Taree, Newcastle, Gosford, Sydney, Wollongong, Nowra, Armidale and Tamworth.

Severe thunderstorms are likely to produce damaging, locally destructive winds, large hailstones and heavy rainfall that may lead to flash flooding over the next several hours in parts of the Mid North Coast and Northern Tablelands districts. Locations which may be affected include Armidale, Ebor, Yarrowitch, Walcha and Uralla.

- 6cm hail was observed at Pozieres, north of Stanthorpe between 5 and 6pm.

- 3-4cm hail was observed south of tenterfield and North of Bolivia around 6pm.

- A tornado signature on radar was observed over western Sydney suburbs around 4:09pm

- 3-4cm hail reported in the Blue Mountains around 3pm 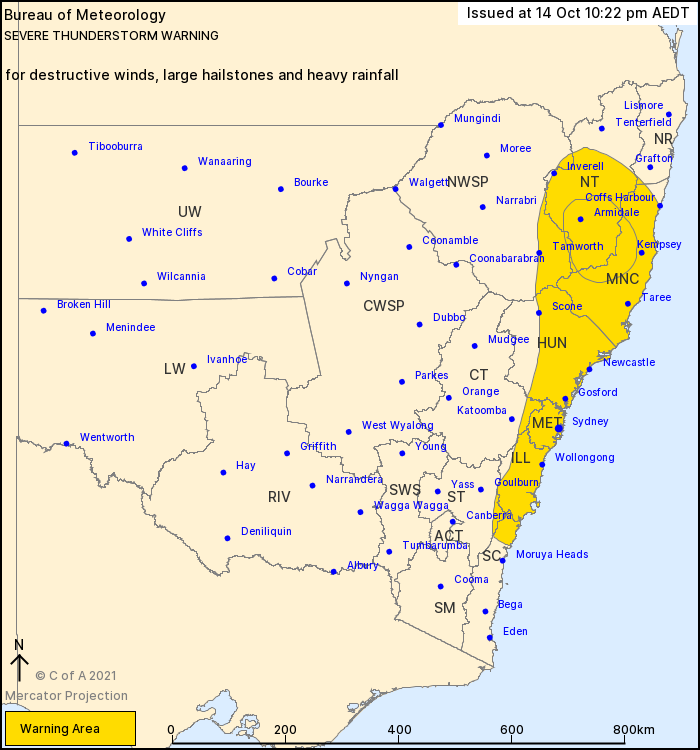