INTENSE RAINFALL WITH SEVERE THUNDERSTORMS IN THE SOUTHEAST

Weather Situation: An upper cut-off low and associated cold front is moving across NSW today and has triggered widespread severe thunderstorms in the southeast.

Severe thunderstorms are likely to produce INTENSE RAINFALL that may lead to DANGEROUS AND LIFE-THREATENING flash flooding and damaging winds over the next several hours in parts of the Illawarra, South Coast, Central Tablelands and Southern Tablelands districts. Locations which may be affected include Braidwood, Bega, Jenolan Caves, Oberon, Araluen and Nerriga.

Severe thunderstorms are likely to produce damaging winds and heavy rainfall that may lead to flash flooding over the next several hours in the South Coast, Central Tablelands and parts of the Illawarra, Southern Tablelands, Central West Slopes and Plains and Snowy Mountains districts. Locations which may be affected include Bowral, Batemans Bay, Mudgee, Bathurst, Katoomba and Goulburn.

Severe thunderstorms are likely to produce damaging winds, large hailstones and heavy rainfall that may lead to flash flooding over the next several hours in parts of the Central Tablelands district. Locations which may be affected include Mudgee, Capertee, Kandos, Gulgong and Dunedoo.

Severe thunderstorms are no longer occurring in the South West Slopes and Australian Capital Territory districts and the warning for these districts is CANCELLED. 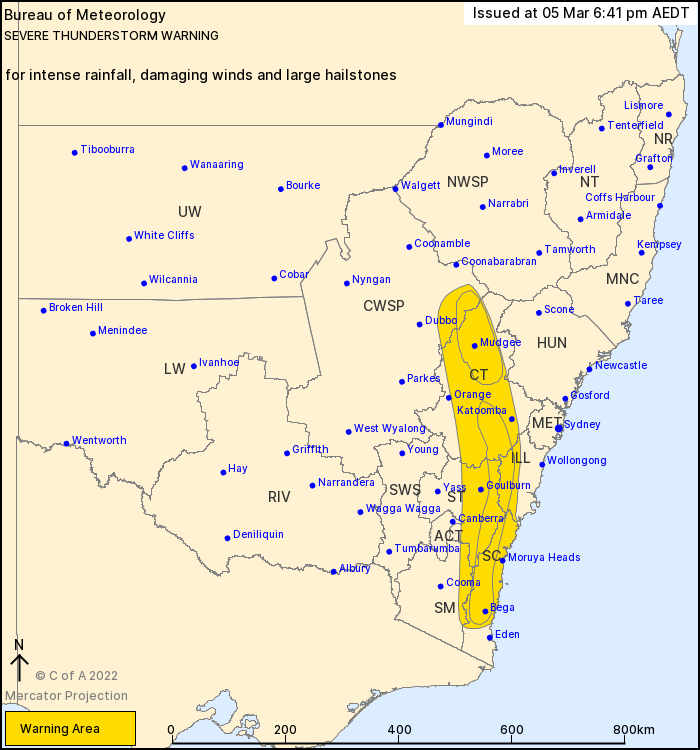