HEAVY RAIN, which may cause FLASH FLOODING and RIVERINE FLOODING, is possible for the southern parts of the South Coast and Monaro Country this morning and early afternoon, easing later this afternoon.

DAMAGING WINDS averaging 60 to 70 km/h, with gusts in excess 90 km/h, are possible along the coastal fringe south of Batemans Bay. These winds are expected to ease during this afternoon and evening as the trough weakens.

DAMAGING SURF CONDITIONS, with waves exceeding 5 metres in the surf zone, may produce significant beach erosion south of Batemans Bay for areas exposed to the east. The surf conditions are expected to ease this afternoon or evening, although hazardous surf will persist into Tuesday.

A Flood Watch and a number of Flood Warnings have also been issued for this event. Severe Thunderstorm Warnings may also be issued.

Broadly speaking across this event (to 9am Monday), between 250-550mm has fallen across many parts of the Northern Rivers, Mid North Coast, Central Coast, Sydney, Blue Mountains and Illawarra forecast districts, with some isolated falls above 600 mm (mostly about the Illawarra).

In the past 24 hours to 9am Monday, the highest rainfall totals included: 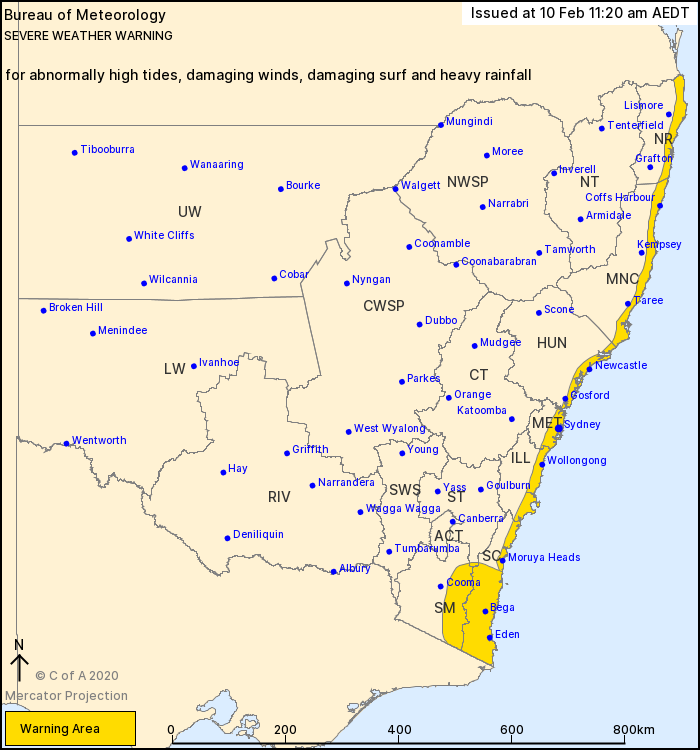