Gusty westerly winds are expected across southeastern New South Wales as a cold front crosses southern districts. Winds will ease and conditions settle from later today and during Monday as a ridge of high pressure pushes across the state from the west.

For alpine areas above 1900 metres, DAMAGING WINDS, averaging 80 to 90 km/h with peak gusts in excess of 120 km/h are likely during Sunday and early Monday. Winds in this area are forecast to ease later Sunday night or early Monday morning.

For areas below 1900 metres, DAMAGING WINDS, averaging 60 to 70 km/h with peak gusts in excess of 90 km/h are possible for parts of the Illawarra, ACT and Monaro/Alpine (including parts of the Southwest Slopes), eastern parts of the Southern Tablelands and the coastal ranges on the South Coast today. Winds in these areas are expected to ease during Sunday afternoon or early evening as a ridge of high pressure extends across the state.

Locations which may be affected include Nowra, Bowral, Braidwood, Goulburn, Bombala and Khancoban.

Thredbo Top Station recorded a 120 km/h wind gust at 5:14am Saturday and has recorded mean wind speeds of 80 km/h or more at times since 4:30am Sunday.

Other notable wind gusts include: 89 km/h at Nerriga AWS, 87 km/h at Cabramurra AWS and 87 km/h at Mount Boyce on Saturday. 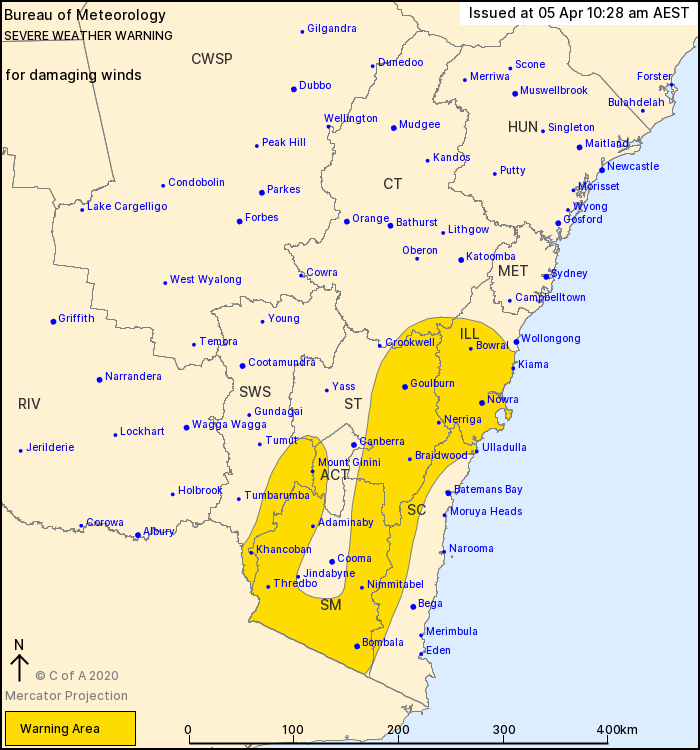