Issued at 2:56 pm Monday, 13 July 2020.
BLUSTERY WINDS AND HEAVY SEAS ALONG PARTS OF THE NSW COAST FROM TUESDAY

Weather Situation: A low pressure system over the Tasman Sea is deepening. This system is forecast to bring gusty winds to parts of the New South Wales coast on Tuesday, and powerful seas to the coast on Tuesday and Wednesday.

DAMAGING WINDS, averaging 60 to 70 km/h with peak gusts in excess of 90 km/h are possible over the coastal fringe of the Illawarra, Sydney Metropolitan, Hunter and Mid North Coast districts on Tuesday.
Winds are expected to gradually ease during Wednesday.

VERY HEAVY SURF which may lead to localised damage and coastal erosion is possible from Tuesday afternoon. South and southeast facing parts of the coast are most at risk.
Beach conditions in these areas could be dangerous and people should stay well away from the surf and surf exposed areas.

A Hazardous Surf Warning is also current along the entire New South Wales Coast.
Surf conditions are expected to ease from Thursday.

Locations which may be affected include Sydney, Newcastle, Sydney, Wollongong, Port Macquarie, The Entrance, Foster and Kiama. 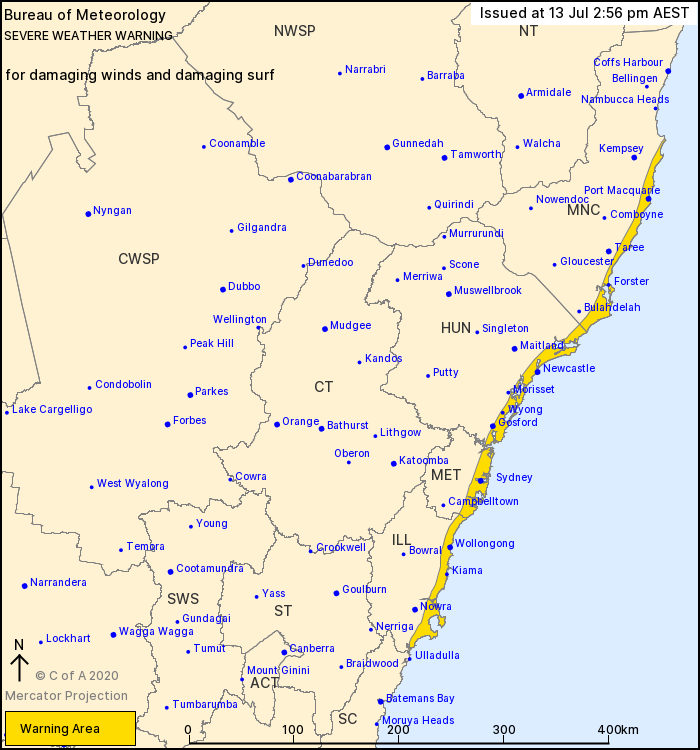