For people in parts of Metropolitan, Illawarra and South Coast Forecast Districts.

A low pressure system that formed off the southern Queensland coast is deepening and heading south towards the New South Wales coast. As the low matures and stalls near the central or southern coast early Monday, damaging wind gusts and wind-driven large sea waves may develop along the southern parts of the coast during the first half of Monday, then the winds and waves will progress north towards the central parts of the coast during the second half.

DAMAGING WINDS, averaging 60 to 70 km/h with peak gusts in excess of 90 km/h are likely to develop along the coastal fringe of the South Coast on Monday morning, before extending north towards Illawarra coast during the day, reaching the Sydney coast and possibly up to the Central Coast later in the evening.

VERY HEAVY SURF which may lead to localised damage and coastal erosion with wind-driven large sea waves is also possible on Monday, especially in the south-facing surf zones.

Locations which may be affected include Sydney, Wollongong, Batemans Bay, Moruya Heads, Ulladulla and Narooma. 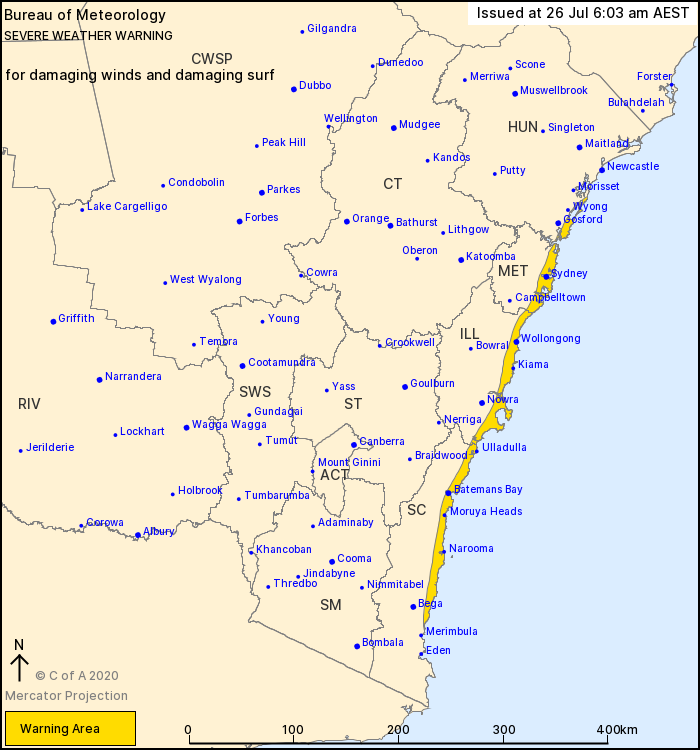