A low pressure system that formed off the southern Queensland coast is deepening and heading south along the New South Wales coast, bringing the potential of heavy rain along the coast and adjacent ranges. Damaging wind gusts and wind-driven large sea waves are expected to develop about southern and central parts of the coast Monday as this low stalls and deepens along the southern coast.

HEAVY RAINFALL, which may lead to localised flash flooding, is possible along central and southern parts of the coast and adjacent ranges tonight and Monday morning.

DAMAGING WINDS, averaging 60 to 70 km/h with peak gusts in excess of 90 km/h are likely to develop along the coastal fringe of the South Coast on Monday morning, before extending north towards Illawarra coast during the day, reaching the Sydney coast and possibly up to the Central Coast later in the evening.

VERY HEAVY SURF which may lead to localised damage and coastal erosion with wind-driven large sea waves is also possible on Monday, especially in the south-facing surf zones. 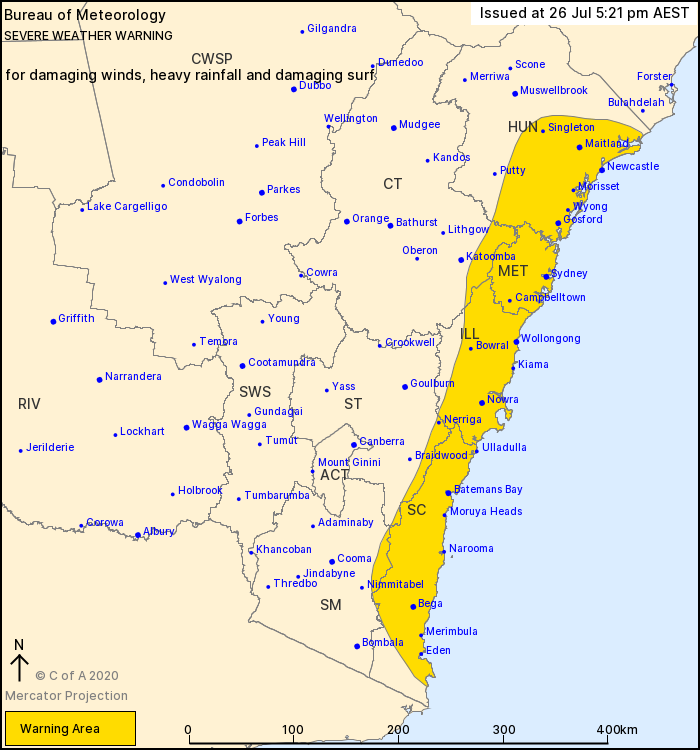