A deep low pressure system lies off the Illawarra coast and is expected to remain slow moving today, bringing damaging winds, rain and large wind-driven waves along southern parts of the coast. Conditions are forecast to ease overnight or during Tuesday morning as the low weakens and moves east.
DAMAGING WINDS, averaging 60 to 70 km/h with peak gusts in excess of 90 km/h are expected along the parts of the Illawarra and the South Coast districts, and are likely to extend to the coastal fringe of Sydney, and possibly the Central Coast, this afternoon.

DAMAGING WINDS may also develop across parts of the Snowy Mountains, Southern Tablelands, ACT, Southern Highlands and the coastal ranges of South Coast during the afternoon.
Winds are expected to gradually ease overnight or on Tuesday morning, as the low gradually weakens and moves east.

VERY HEAVY SURF which may lead to localised damage and coastal erosion with wind-driven large sea waves is likely for coastal areas south of about the Central Coast, especially in the south-facing surf zones.
Beach conditions in these areas could be dangerous and people should stay well away from the surf and surf exposed areas.
A Hazardous Surf Warning is also current for coastal areas between the South Coast and Hunter Coast. See http://www.bom.gov.au/nsw/warnings/hazardoussurf.shtml.

Locations which may be affected include Sydney, Wollongong, Nowra, Batemans Bay, Eden and Cooma.

The Batemans Bay wave rider buoy has recorded a significant wave height of 5m this morning, with a maximum wave height of 9.2m, this morning.
Many locations through the Hunter, Sydney Metropolitan, Illawarra and South Coast districts have recorded in excess of 100 mm of rainfall in the past 24 hours. 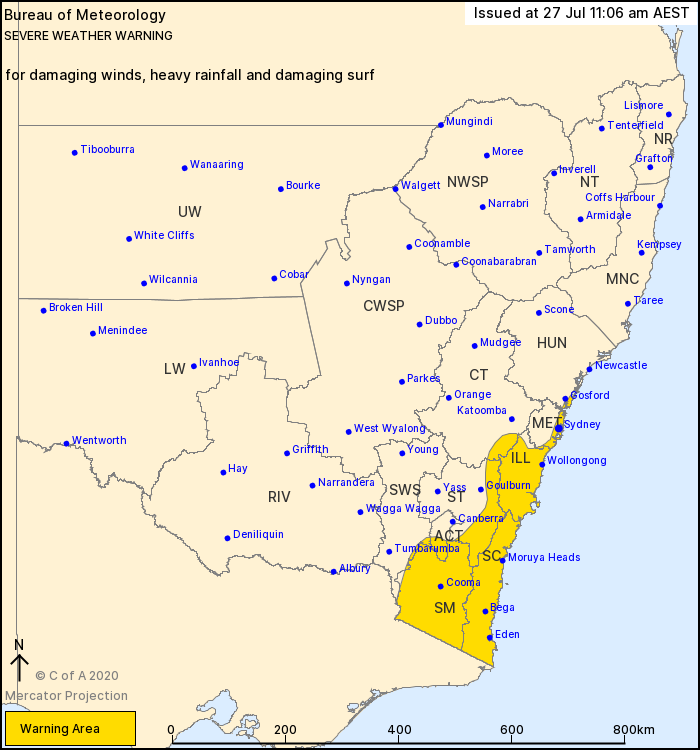