VIGOROUS WINDS ACROSS THE RANGES TODAY AND SATURDAY.

A deep low pressure system south of the Bight will move slowly east over the next couple of days. A series of troughs and cold fronts associated with this low are forecast to cross southeast Australia during this period, bringing a vigorous westerly airflow to the region, particularly today and Saturday.

EAST: DAMAGING WINDS, averaging 60 to 70 km/h with gusts in excess of 90 km/h, are possible in the Alpine, Southern Tablelands, Illawarra, Blue Mountains and elevated parts of the South Coast, ACT and parts of the South West Slopes from this afternoon and likely to continue into Saturday. Higher terrain within the warning area is most at risk. BLIZZARD CONDITIONS also possible above 1500 metres in the Alpine with blowing snow.

As the front approaches, the areas of damaging winds are forecast to extend north by Saturday morning, including the Hunter, Northern Tablelands, elevated parts of the Mid North Coast, and parts of the Sydney Metropolitan Area.

The threat of damaging winds in the eastern area is likely to continue into Saturday, before easing early on Sunday.

Damaging winds with gusts in excess of 90 km/h are possible, most likely in association with gusty showers or thunderstorms. The threat of damaging winds in the western area should ease early Saturday after the front moves through the area.

Locations which may be affected include Newcastle, Maitland, Wollongong, Nowra, Bowral, Armidale, Katoomba, Goulburn, Wentworth and parts of the Sydney Metropolitan Area. 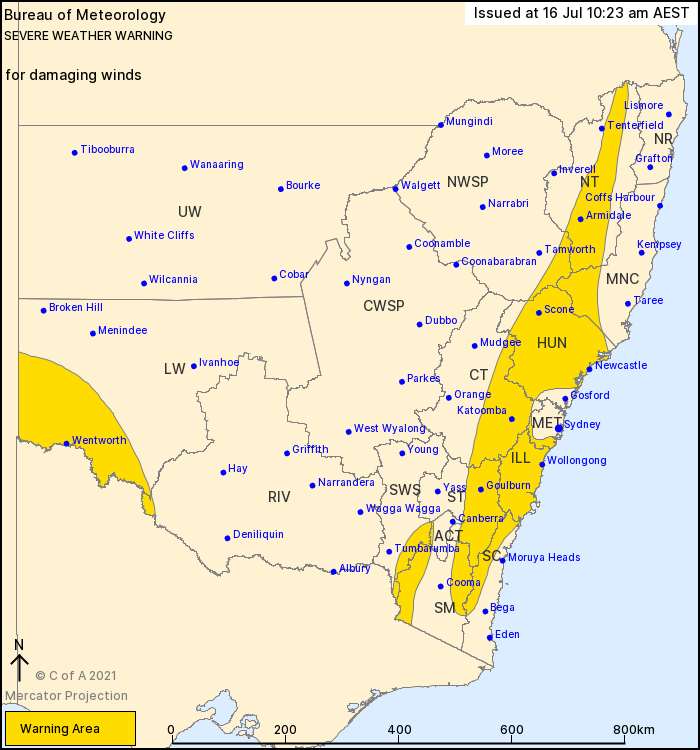