A strong cold front is crossing western New South Wales today. As this front reaches the coast early Wednesday, a low pressure system will deepen over the Tasman Sea while a high moves into western New South Wales. Vigorous southerly winds are expected to develop between these systems, especially along the coast, where they will generate large waves.

DAMAGING WINDS, averaging 60 to 70 km/h with gusts in excess of 90 km/h, are possible along the coastal fringe between Jervis Bay and Forster from Wednesday morning.

DAMAGING SURF, with wave heights exceeding 5 metres in the surf zone, may lead to localised coastal erosion between Jervis Bay and Port Macquarie during Wednesday, especially in areas with a more southerly aspect. Beach conditions in these areas are likely to be dangerous, and people should stay well away from the surf and surf-exposed areas.

ABNORMALLY HIGH TIDES, which may cause sea water flooding of low lying areas, are possible between Jervis Bay and Port Macquarie during Wednesday. In some areas water levels could exceed the highest tide of the year by 50cm during the evening high tide. 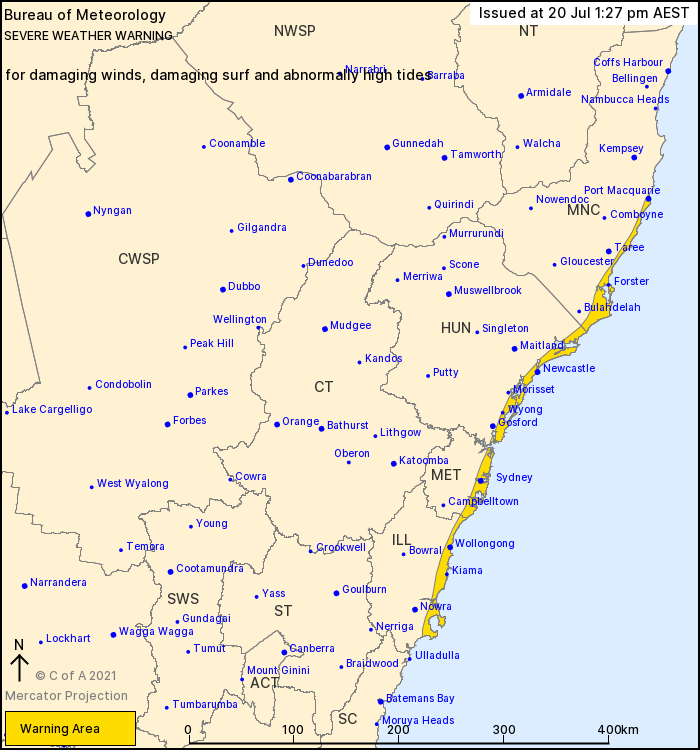