Weather Situation: A low pressure system has developed over southeast Queensland, embedded within a surface trough and supported by an upper low. This low is forecast to deepen and track southward into northeastern New South Wales during Sunday producing widespread heavy rainfall with areas of locally intense rainfall associated with embedded thunderstorms.

HEAVY RAINFALL which may lead to flash flooding is forecast to extend over northern parts of the Northern Rivers district during this morning, extending further across northeastern New South Wales by later today. Six-hourly rainfall totals between 80 and 110 mm are likely, possibly reaching in excess of 150 mm.

Locally INTENSE RAINFALL leading to dangerous and LIFE-THREATENING FLASH FLOODING is possible with thunderstorms from Sunday afternoon with six-hourly rainfall totals in excess of 250 mm possible, most likely over the Northern Rivers and adjacent ranges. A separate Severe Thunderstorm Warning will be issued if very dangerous thunderstorms with intense rainfall are detected.

DAMAGING WIND GUSTS with peak gusts in excess of 90 km/h are possible over coastal areas and peaks, mainly north of Coffs Harbour from Sunday afternoon. 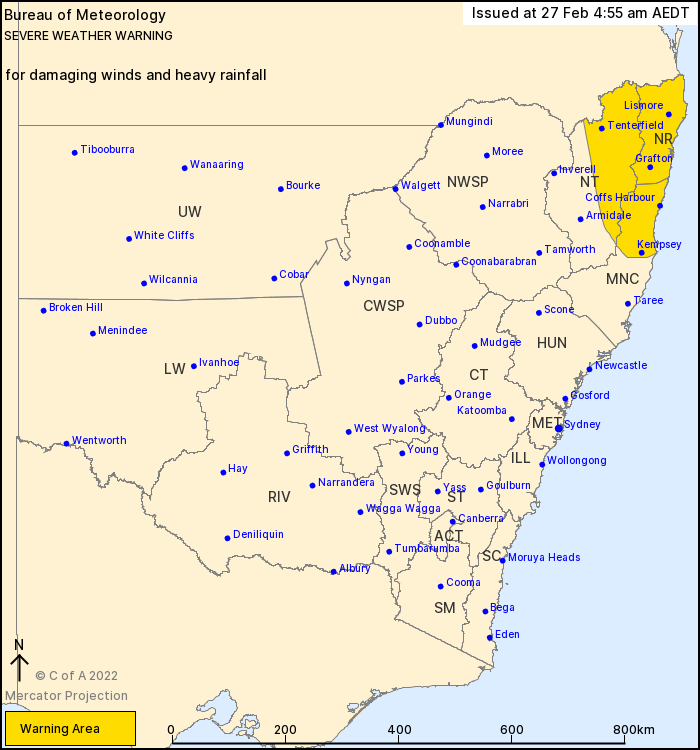