For people in parts of Hunter and Metropolitan Forecast Districts.

Weather Situation: A trough over the central coast is causing moderate to possibly heavy rainfall at times. Rainfall rates are forecast to east during Tuesday morning.

Localised MODERATE to HEAVY RAINFALL which may lead to FLASH FLOODING remains possible Tuesday morning over parts of the Hunter district. Isolated three-hourly rainfall totals between 40 to 65 mm are possible.

DAMAGING WINDS averaging 60 to 70 km/h with peak gusts up to 90 km/h are possible along the northern Metropolitan and southern Hunter coastal fringe, with an easing trend Tuesday morning. The damaging winds may lead to debris on roads and provide the risk for trees toppling in softer and very saturated soils.

Various Flood Warnings and Watches are current, so please refer to those flood warnings at http://www.bom.gov.au/nsw/warnings/ and heed the advice of authorities.

Locations which may be affected include Gosford, Cessnock, Maitland, Sydney, Dungog and Kulnura.

Severe weather is no longer occurring in the Central Tablelands district and the warning for this district is CANCELLED.

Significant rainfall from 9am Monday to 4:30am Tuesday:

Significant rainfall from 9am Sunday to 9am Monday: 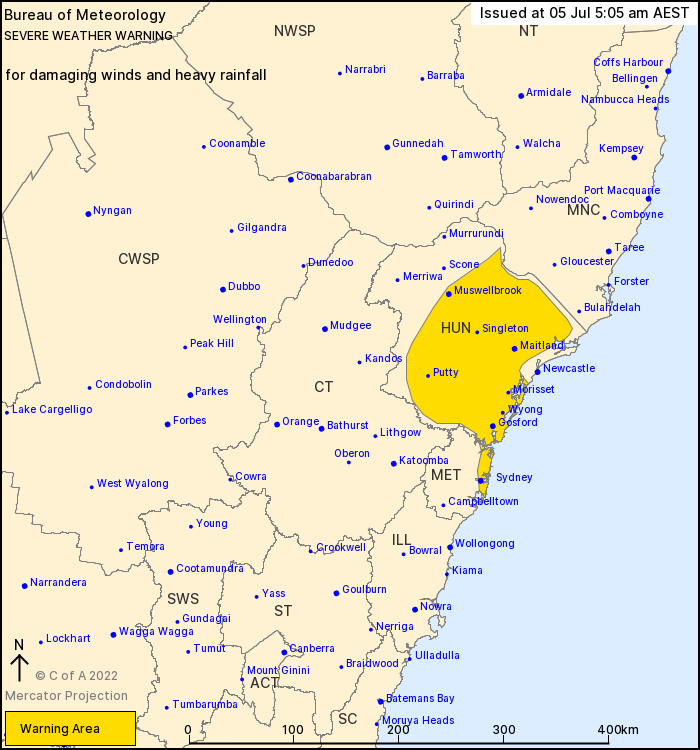