HEAVY RAIN IN THE SOUTHEAST, COASTAL WINDS TO INCREASE

A trough along the New South Wales coast is deepening today, with multiple low pressure centres likely to develop within the trough tonight and Sunday. This system is currently bringing widespread rain to the southern half of the coast, and is set to bring increased winds as the low centres develop.

HEAVY RAINFALL, which may lead to FLASH FLOODING and RIVERINE FLOODING, is forecast for the South Coast and Illawarra districts, and eastern parts of the Snowy Mountains and Southern Tablelands districts today and Sunday.

There is a risk of heavy rain lingering into Monday morning.

A Flood Watch is current for the South Coast river catchments. See http://www.bom.gov.au/nsw/warnings/flood/floodwatch1.shtml for more information.

DAMAGING WINDS, averaging 60 to 70 km/h with gusts in excess of 90 km/h, are possible along the coastal fringe of the South Coast district this evening, and on the Illawarra coastal fringe during Sunday, and the Sydney and Central coastal fringes Sunday afternoon and evening.

Rainfall totals for the 24 hours to 9am Saturday:

Rainfall totals since 9am Saturday: 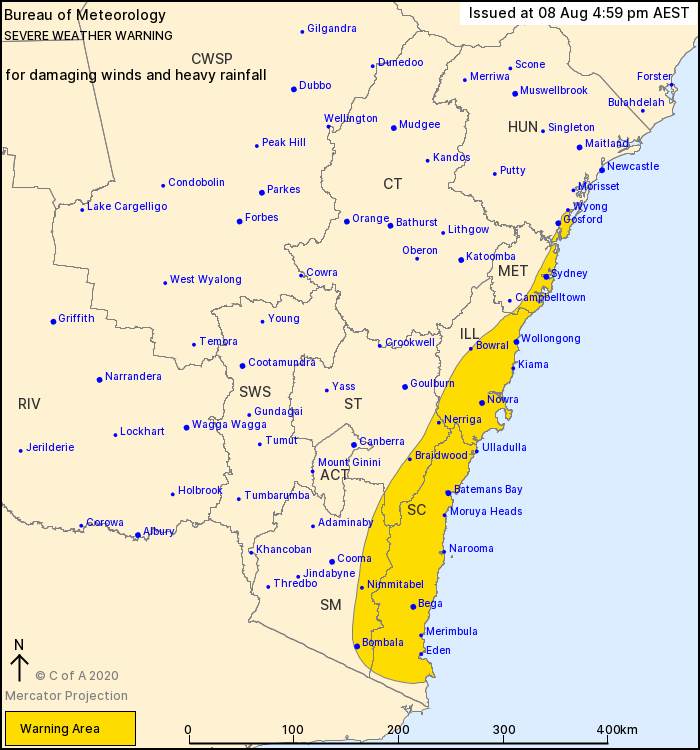