For people in Metropolitan, Illawarra and parts of Hunter and Central Tablelands Forecast Districts.

Heavy rainfall possible about the central NSW east of the ranges.

Weather Situation:
A surface trough is expected to deepen offshore from the Illawarra area today and move slowly northward over the remainder of the weekend, driving widespread showers and heavy rain along parts of the eastern coast of NSW. An East Coast Low may form within the trough during Sunday and linger until Monday, which will prolong this significant rainfall event across multiple days.

HEAVY RAINFALL which may lead to FLASH FLOODING is forecast for the Illawarra, extending to the Sydney Metropolitan and Hunter districts over the weekend. Six-hourly rainfall totals between 70 to 120 mm are possible.

There is the potential for an East Coast Low to develop off the coast during Sunday and remain in the vicinity on Monday, which would prolong this heavy rainfall event into early next week, with consecutive days of heavy rainfall possible. If an East Coast Low does form, damaging wind gusts may become a risk late on Sunday continuing overnight into Monday, depending on the strength and location of the low.

A Flood Watch has been issued for this event for coastal catchments from the Hunter to the South Coast, see http://www.bom.gov.au/nsw/warnings/index.shtml.

Severe weather is no longer occurring in the South Coast and Southern Tablelands districts and the warning for these districts is CANCELLED. 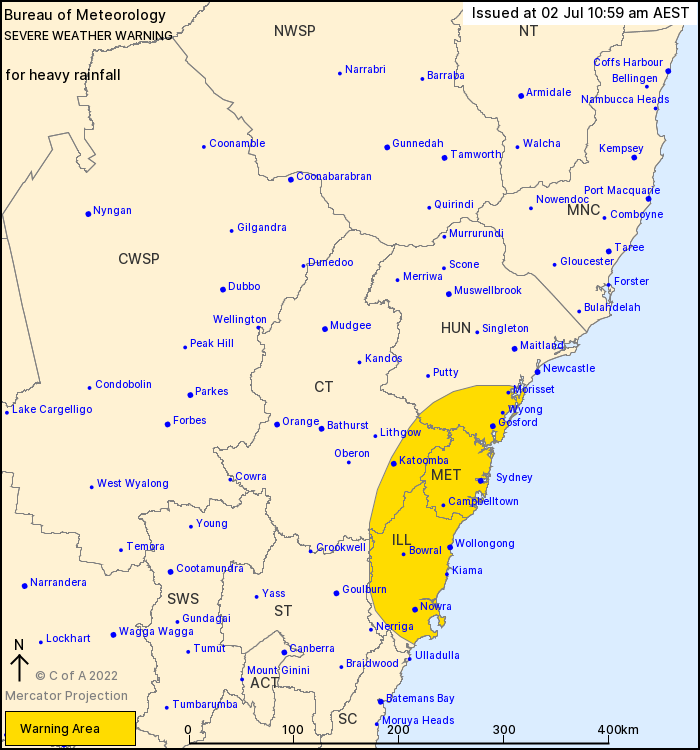