For people in Metropolitan, Illawarra and parts of Hunter and Central Tablelands Forecast Districts.

Threat of heavy rainfall will continue to ease today on and east of the ranges across central NSW.

Weather Situation: A trough over the central coast will continue to direct a moist onshore flow, causing moderate to possibly heavy rainfall at times in areas near and to the south of the trough. The trough is forecast to move northward later today with drier air moving up the New South Wales coast in its wake.

Although rainfall rates have generally eased, localised HEAVY RAINFALL which may lead to FLASH FLOODING remains possible until later this evening over the Illawarra, Blue Mountains, Sydney Metropolitan, and parts of Hunter (including Central Coast) districts. Isolated three-hourly rainfall totals between 50 to 75 mm are possible.

Rainfall over the Sydney Metropolitan and Illawarra districts will ease this afternoon as showers and rain areas contract northward to the Hunter district. Light to moderate rainfall is expected to continue across the Hunter into Tuesday.

Rainfall will further contribute to flooding already being experienced, and maintains the potential for landslides.

Damaging wind gusts are no longer expected across the warning area. However, strong and gusty winds may still provide the risk of trees toppling in softer and very saturated soils, particularly about the coastal fringe and ranges.

Various Flood Warnings and Watches are current, including some MODERATE to MAJOR flooding in some high population areas, so please refer to those flood warnings at http://www.bom.gov.au/nsw/warnings/ and heed the advice of authorities.

Significant rainfall from 9am Sunday to 9am Monday:

Significant rainfall from 9am Saturday to 9am Sunday: 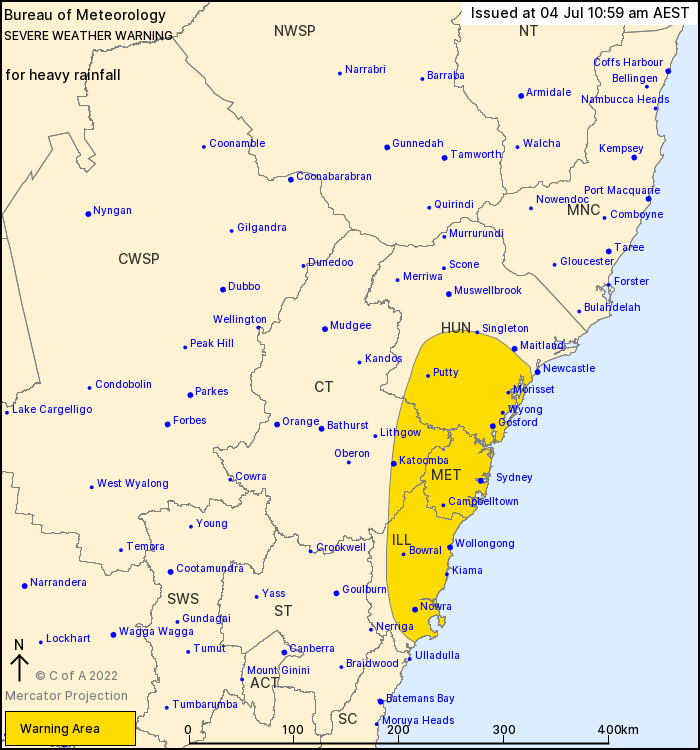