For people in Mid North Coast and parts of Northern Tablelands Forecast Districts.

The threat of localised heavy rainfall to persist about the Mid North Coast and parts of the Northern Tablelands, while easing throughout the Hunter.

Weather Situation: Onshore flow combined with an upper trough will continue to bring persistent rainfall. A coastal trough is also forecast to develop across the northeast later this evening then deepen in response to a highly amplified upper trough and associated low on Wednesday, before pushing further offshore late Wednesday.

HEAVY RAINFALL which may lead to FLASH FLOODING may develop across the Mid North Coast and southeastern areas of the Northern Tablelands later this evening, continuing through Wednesday and easing late Wednesday. Six-hourly rainfall totals between 60 to 90 mm are possible, with some very isolated six-hourly totals reaching up to 125 mm.

Various Flood Warnings and Watches are current, please refer to them at http://www.bom.gov.au/nsw/warnings/ and heed the advice of authorities.

Locations which may be affected include Coffs Harbour, Port Macquarie, Taree, Kempsey, Sawtell and Dorrigo.

Severe weather is no longer occurring in the Hunter district and the warning for this district is CANCELLED.

Significant 24 hour rainfall to 9:00 am Tuesday: 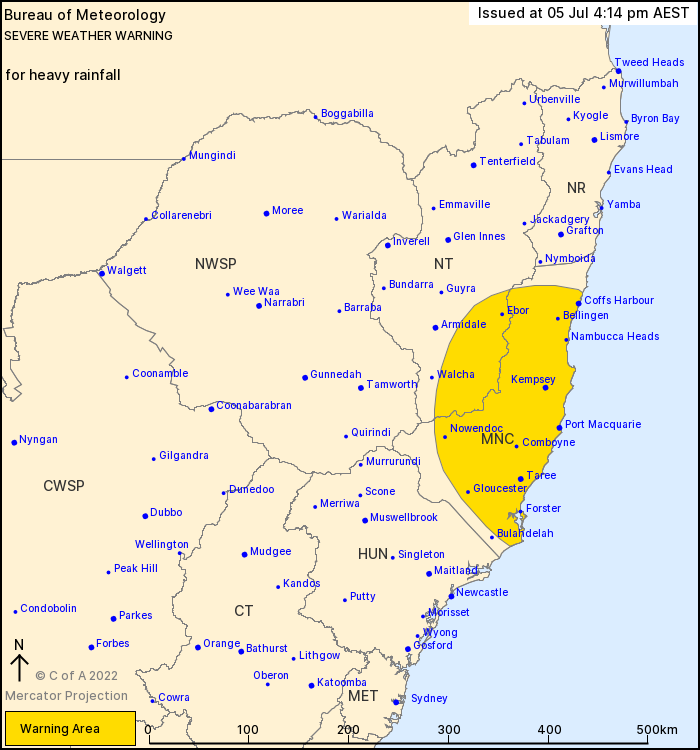