For people in Mid North Coast and parts of Northern Tablelands Forecast Districts.

The threat of localised heavy rainfall to continue building about the Mid North Coast and parts of the Northern Tablelands overnight and into Wednesday.

HEAVY RAINFALL which may lead to FLASH FLOODING will continue to develop across the Mid North Coast and southeastern areas of the Northern Tablelands overnight tonight, continuing through Wednesday and easing late in the day. Six-hourly rainfall totals between 60 and 90 mm are possible throughout the warning area. Isolated six-hourly totals between 125 and 150 mm are also possible, most likely associated with embedded thunderstorms north of Kempsey during Wednesday.

If INTENSE rainfall rates are detected with thunderstorms, a separate Severe Thunderstorm Warning will be issued.

Various Flood Warnings and Watches are current, please refer to them at http://www.bom.gov.au/nsw/warnings/ and heed the advice of authorities.

Locations which may be affected include Coffs Harbour, Port Macquarie, Taree, Woolgoolga, Sawtell and Dorrigo. 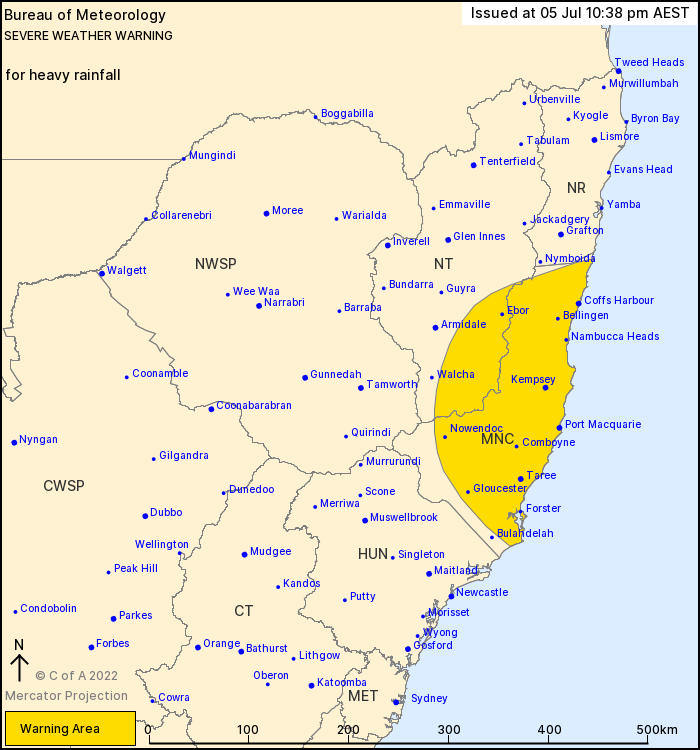