For people in parts of Wide Bay and Burnett, Darling Downs and Granite Belt and Southeast Coast Forecast Districts.

Weather Situation: A moderately unstable airmass over southeast Queensland combined with strong winds in the upper atmosphere and the approach of an upper level trough from the west will lead to increasing chances of severe thunderstorms later this evening. Initially, large hail and damaging winds will be the main potential hazards, but heavy rainfall will become more likely with clusters or bands of storms later tonight.

Severe thunderstorms are likely to produce damaging winds and large hailstones in the warning area over the next several hours. Locations which may be affected include Toowoomba, Dalby, Gympie, Kingaroy, Gatton, Cherbourg, Oakey, Murgon, Esk, Imbil, Kilcoy and Nanango.

Severe thunderstorms are no longer occurring in the Maranoa and Warrego district and the warning for this district is CANCELLED.

A 93 km/h wind gust was recently recorded at Dalby Airport.

Queensland Fire and Emergency Services advises that people should:
* Move your car under cover or away from trees.
* Secure loose outdoor items.
* Seek shelter, preferably indoors and never under trees.
* Avoid using the telephone during a thunderstorm.
* Beware of fallen trees and powerlines.
* For emergency assistance contact the SES on 132 500. 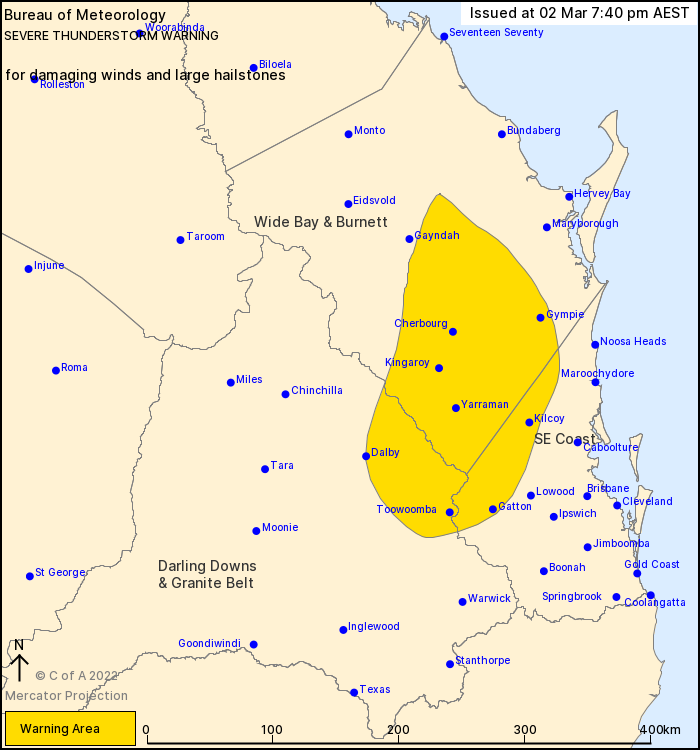