For people in parts of Central West, Maranoa and Warrego and Darling Downs and Granite Belt Forecast Districts.

Issued at 5:59 pm Wednesday, 29 September 2021.
Thunderstorms are continuing to develop.

Weather Situation: A trough and associated dryline will continue to produce thunderstorm activity over the central and southern interior of Queensland into the evening. The environment near the NSW border will support high-end severe thunderstorms for another hour or two.

Severe thunderstorms are likely to produce damaging, locally destructive winds and large, possibly giant hailstones over the next several hours in southern parts of the Maranoa and Warrego district.

Severe thunderstorms are likely to produce damaging winds and large hailstones over the next several hours in parts of the Central West, Maranoa and Warrego and Darling Downs and Granite Belt districts. Locations which may be affected include Charleville, St George, Barcaldine, Tambo, Blackall and Mungindi.
Trees down at Noonbah about 4pm

Large to giant hail reported between Cunnamulla and Eulo about 4pm

Queensland Fire and Emergency Services advises that people should:
* Move your car under cover or away from trees.
* Secure loose outdoor items.
* Seek shelter, preferably indoors and never under trees.
* Avoid using the telephone during a thunderstorm.
* Beware of fallen trees and powerlines.
* For emergency assistance contact the SES on 132 500. 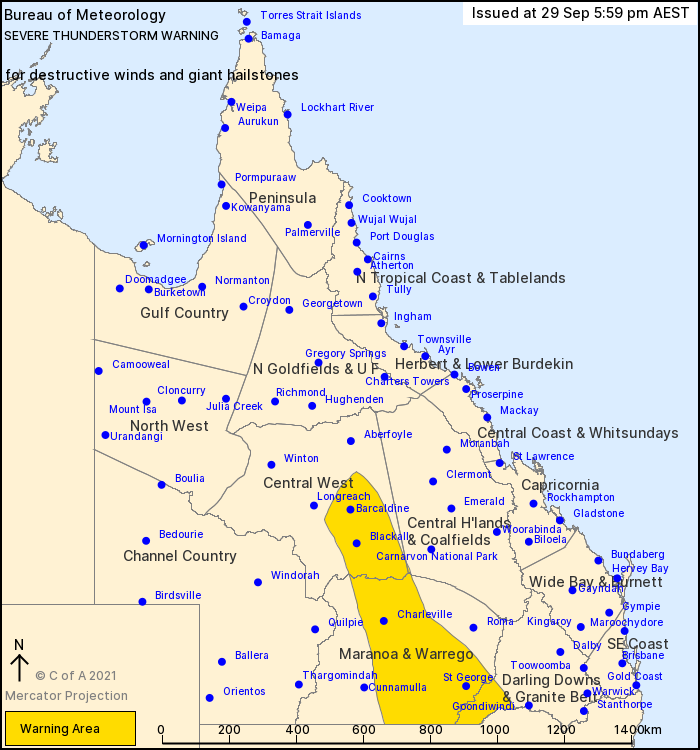