Weather Situation: An upper low will move slowly eastward across southern Queensland through today before rotating over the southeast on Friday. A surface trough near the southeast coast will deepen in response to this upper weather system through today. Through the overnight period into this morning, the main trough and heavy rainfall has remained just off the coast, however this trough may move or redevelop back over land later today and then remain slow-moving into Friday, producing periods of heavy rainfall with embedded thunderstorms.

HEAVY RAINFALL which may lead to flash flooding is expected to increase later today and overnight across parts of Southeast Queensland, and continue into Friday. Six-hourly rainfall totals between 80 and 120 mm are likely, reaching up to 180 mm over areas east of Gympie to Jimboomba. The heaviest falls are expected through the latter parts of Thursday into Friday morning.

Locally INTENSE RAINFALL leading to dangerous and life-threatening flash flooding is possible this evening into early Friday, with the mostly likely area about the coast and nearby inland north of Brisbane. In these areas, six-hourly rainfall totals up to 300 mm are possible. A separate Severe Thunderstorm Warning will be issued if very dangerous storms with intense rainfall are detected.

DAMAGING WIND GUSTS with peak gusts in excess of 90 km/h are possible from late this afternoon over the Southeast Coast district, east of about Gympie to Mt Tamborine although most likely near the coast north of Brisbane. 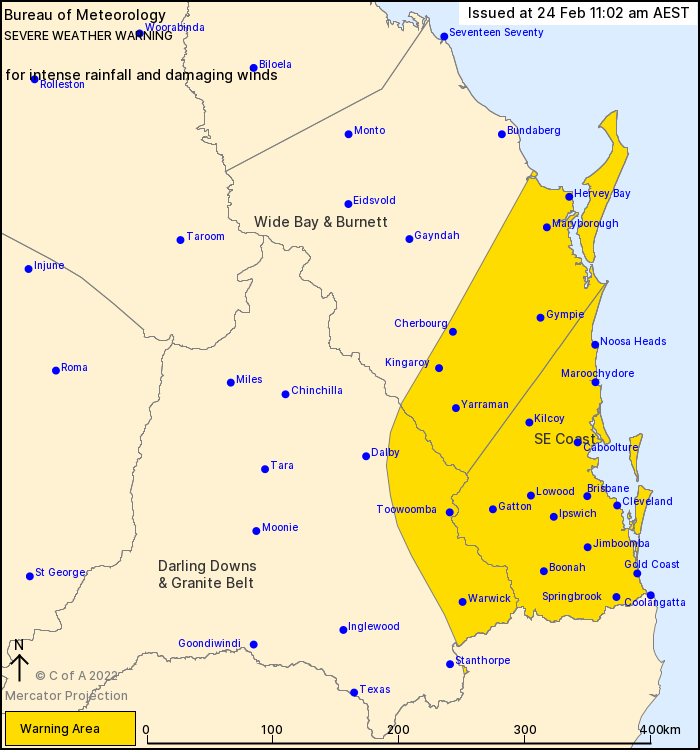