HEAVY RAIN AND THUNDERSTORMS WITH LOCALLY INTENSE FALLS OVER SE QLD THIS WEEKEND.

Weather Situation: A surface trough over southeast Queensland is forecast to deepen into a low over the Wide Bay and Burnett district in response to a strong upper low later tonight. This low is expected to track southward over the Southeast Coast and into northeastern New South Wales during Sunday producing further heavy to locally intense rainfall with embedded thunderstorms. The evolution of this system and its relatively slow movement will continue to cause significant and prolonged impacts across southeast Queensland over the weekend.

HEAVY RAINFALL which may lead to flash flooding is forecast to continue over parts of southeast Queensland this weekend. Six-hourly rainfall totals between 80 and 120 mm are likely to continue, reaching up to 180 mm over areas east of Kingaroy to Toowoomba today (Saturday) and south to the NSW border on Sunday.

Locally INTENSE RAINFALL leading to dangerous and LIFE-THREATENING FLASH FLOODING is possible with thunderstorms during this period, particularly over areas east of Hervey Bay to Yarraman, Toowoomba and Ipswich today (Saturday) extending south to the NSW border on Sunday. Six-hourly rainfall totals in excess of 300 mm are possible. A separate Severe Thunderstorm Warning will be issued if very dangerous thunderstorms with intense rainfall are detected.

DAMAGING WIND GUSTS with peak gusts in excess of 90 km/h are possible over coastal areas north of about Maroochydore. This threat will expand to coastal areas further south towards the the NSW border later this evening and through Sunday morning.

A Flood Watch and multiple Flood Warnings are current for parts of Southeast Queensland. For more details, please visit www.bom.gov.au/qld/warnings/.

Rainfall to 9am Saturday: 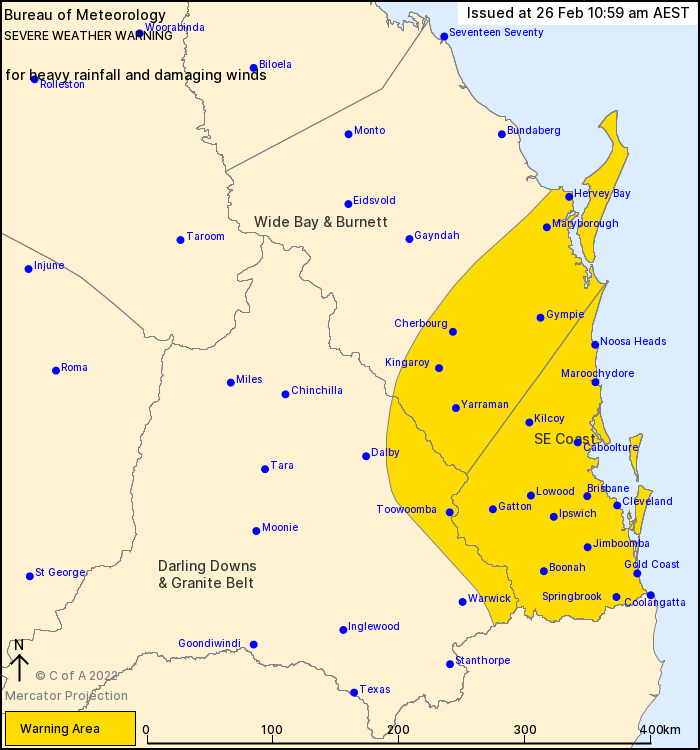