For people in Central West and parts of Northern Goldfields and Upper Flinders, North West and Channel Country Forecast Districts.

Issued at 4:49 am Monday, 25 April 2022.
Heavy rainfall possible over parts of central and western Queensland later today and through Tuesday.

Weather Situation: A significant upper trough and associated low is forecast to intensify over southern Australia later today and through Tuesday. These systems is expected to combine with a deep, tropical airmass to produce areas of heavy rainfall with embedded thunderstorms over central and western Queensland.

HEAVY RAINFALL which may lead to FLASH FLOODING is forecast for parts of central and western Queensland from later today and continue through Tuesday. Isolated six-hourly rainfall totals between 60 to 90 mm are possible, reaching up to 120 mm north of Longreach, particularly with thunderstorms.

Elsewhere over western and central Queensland and outside of the warning area, expect light to moderate rainfall to continue where severe thresholds are unlikely to be reached.
A Flood Watch is current for parts of central and western Queensland. 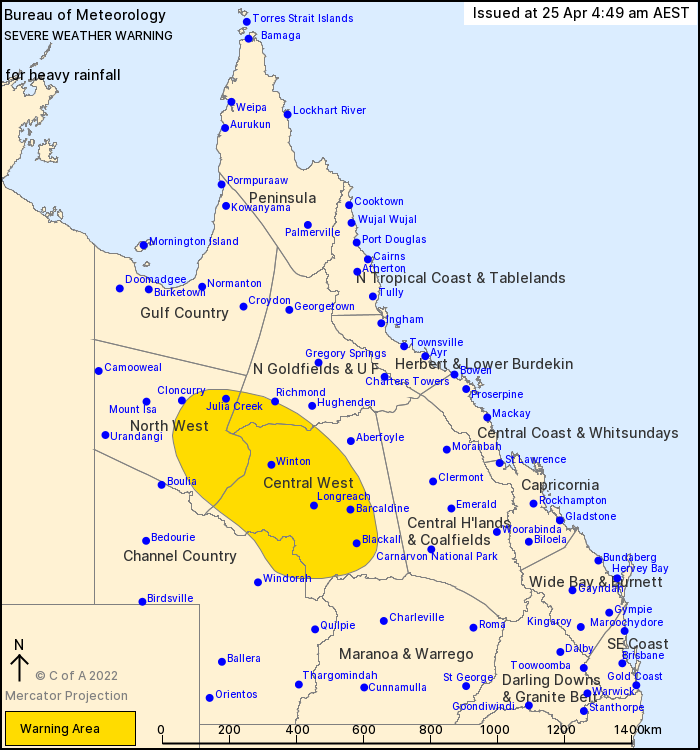