For people in Northern Goldfields and Upper Flinders, Herbert and Lower Burdekin and parts of North Tropical Coast and Tablelands, Central Coast and Whitsundays, Central Highlands and Coalfields and Central West Forecast Districts.

HEAVY RAINFALL ACROSS THE INTERIOR, DEVELOPING OVER THE NORTHEAST TROPICS WITH INTENSE FALLS POSSIBLE.

Weather Situation: An unseasonably moist northeasterly flow extending across Queensland is combining with a significant upper trough and associated low over central Australia. As a result, widespread heavy rainfall is expected to continue across the interior. Heavy rainfall is expected to shift east with a developing surface low over the northeast tropics later today and potentially move south over the Central Coast during Wednesday. However, uncertainty exists with the development and movement of the surface low during this period.

HEAVY RAINFALL which may lead to FLASH FLOODING is forecast to continue over parts of the Central West, Northern Goldfields and Upper Flinders, and Central Highlands and Coalfields. Six-hourly rainfall totals between 60 to 100 mm are likely.

Locally INTENSE RAINFALL which may lead to DANGEROUS AND LIFE-THREATENING FLASH FLOODING is also possible with thunderstorms over the northern Central West, and southeastern Northern Goldfields and Upper FLinders for the remainder of the day. Six-hourly rainfall totals up to 150mm are possible.

HEAVY RAINFALL which may lead to FLASH FLOODING is forecast to develop over parts of the North Tropical Coast, Herbert and Lower Burdekin, and Central Coast districts later today. Six-hourly rainfall totals between 100 to 150 mm are likely, reaching up to 200 mm about the northeast tropical coast.

Locally INTENSE RAINFALL which may lead to DANGEROUS AND LIFE-THREATENING FLASH FLOODING is also possible with thunderstorms in parts of the North Tropical Coast and Herbert and Lower Burdekin district, with six-hourly totals in excess of 200mm possible.

A separate Severe Thunderstorm Warning will be issued if very dangerous thunderstorms with intense rainfall are detected.

Flood Warnings and a Flood Watch are current for catchments across much of tropical and inland Queensland. See http://www.bom.gov.au/qld/warnings/ for more information.

Severe weather is no longer occurring in the Gulf Country and North West districts and the warning for these districts is CANCELLED.

Significant rainfall observations in the 24 hour period to 9 am AEST Tuesday include: 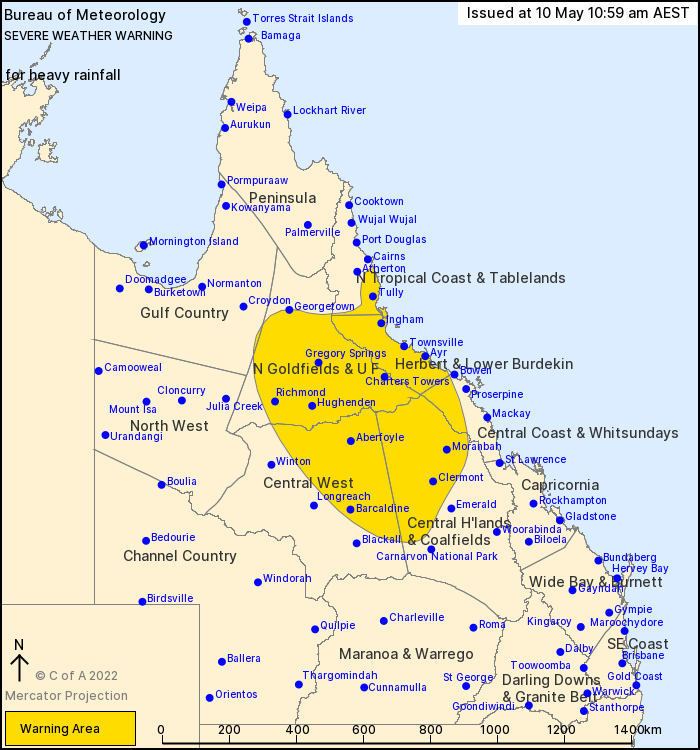