VERY WINDY ACROSS MUCH OF SA THROUGH SATURDAY, INTO EARLY SUNDAY MORNING.

Weather Situation: Strong cold fronts embedded in a vigorous westerly airstream will sweep across SA on Saturday. These will bring widespread damaging winds at times, together with squally showers, thunderstorms and heavy bursts of rain. The first front will reach Kangaroo Island shortly after midnight tonight and cross southern districts early Saturday morning, followed by a second front during the late morning and afternoon. Damaging conditions to continue through Saturday afternoon and evening.

Damaging winds with gusts over 90 km/h are possible from soon after midnight tonight, with the first front crossing the south. Areas more likely to be affected are southern coastal districts and the ranges.

More widespread damaging winds, averaging 50-70 km/h at times with gusts over 100 km/h, are expected from late Saturday morning and continuing right through Saturday afternoon and evening, with and following the second front.

For Adelaide, wind and rain impacts are possible through much of Saturday, however the windiest conditions are generally expected during Saturday afternoon and evening.

Damaging conditions are expected to contract back to mainly coastal districts and the ranges early Sunday morning. 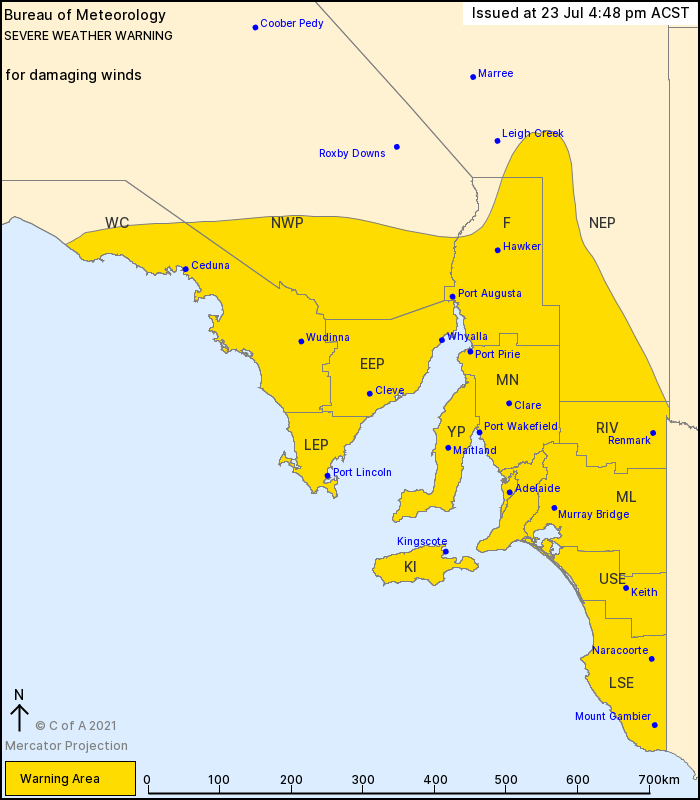