For people in North East Pastoral and parts of North West Pastoral districts.

SEVERE THUNDERSTORMS AND HEAVY TO INTENSE RAINFALL ACROSS THE NORTH OF THE STATE.

Weather Situation: A trough extends from a low embedded in the monsoon trough over northern WA southwards into northern SA. Convergence in an environment with significant tropical moisture leading to widespread heavy and intense rainfall.

HEAVY RAINFALL which may lead to flash flooding is forecast for the north of the state.

Locally INTENSE RAINFALL which may lead to dangerous and life-threatening flash flooding is also possible in the warning area.

Severe thunderstorms with heavy to intense rainfall are also possible in the warning area.

Rainfall is expected to gradually clear from the west during Tuesday night, with a focus more towards the Queensland border during Wednesday.

Locations which may be affected include Marla, Coober Pedy, Moomba, Ernabella, Oodnadatta and Marree.

Ernabella recorded 106mm of rainfall in the 24 hours to 9am this morning. 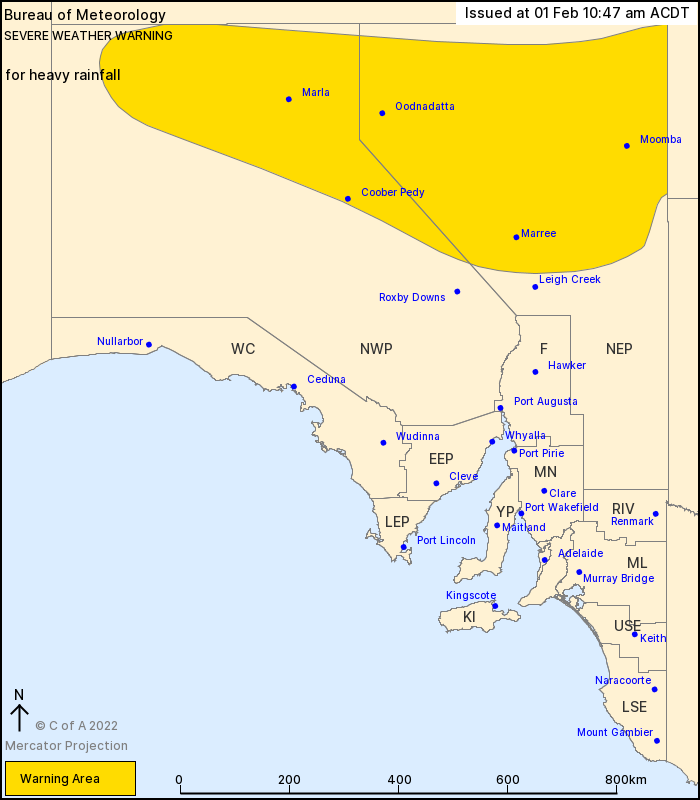