Weather Situation: A very moist and unstable airmass is in place across Victoria, ahead of a trough moving eastwards into the state.

Severe thunderstorms are likely to produce damaging, locally destructive winds, large hailstones and heavy rainfall that may lead to flash flooding over the next several hours in parts of the Mallee and Northern Country districts. Locations which may be affected include Swan Hill, Kerang and Echuca.

Severe thunderstorms are likely to produce intense rainfall that may lead to dangerous and life-threatening flash flooding and damaging winds over the next several hours in the Central, Mallee, Northern Country, North Central and parts of the North East, West and South Gippsland and Wimmera districts. Locations which may be affected include Mildura, Bendigo, Shepparton, Seymour, Maryborough, Ballarat, Geelong and Melbourne.

Severe thunderstorms are no longer occurring in the South West district and the warning for this district is CANCELLED.

A 107km/h wind gusts was recorded at Longerenong at 5:04pm

34.4mm of rainfall was recorded in 30minutes at St Arnaud

The State Emergency Service advises that people should:
* If driving conditions are dangerous, safely pull over away from trees, drains, low-lying areas and floodwater. Avoid travel if possible.
* Stay safe by avoiding dangerous hazards, such as floodwater, mud, debris, damaged roads and fallen trees.
* Be aware - heat, fire or recent storms may make trees unstable and more likely to fall when it's windy or wet.
* Check that loose items, such as outdoor settings, umbrellas and trampolines are safely secured. Move vehicles under cover or away from trees.
* Stay indoors and away from windows.
* If outdoors, move to a safe place indoors. Stay away from trees, drains, gutters, creeks and waterways.
* Stay away from fallen powerlines - always assume they are live.
* Be aware that in fire affected areas, rainfall run-off into waterways may contain debris such as ash, soil, trees and rocks. Heavy rainfall may also increase the potential for landslides and debris across roads.
* Stay informed: Monitor weather warnings, forecasts and river levels at the Bureau of Meteorology website, and warnings through VicEmergency website/app/hotline 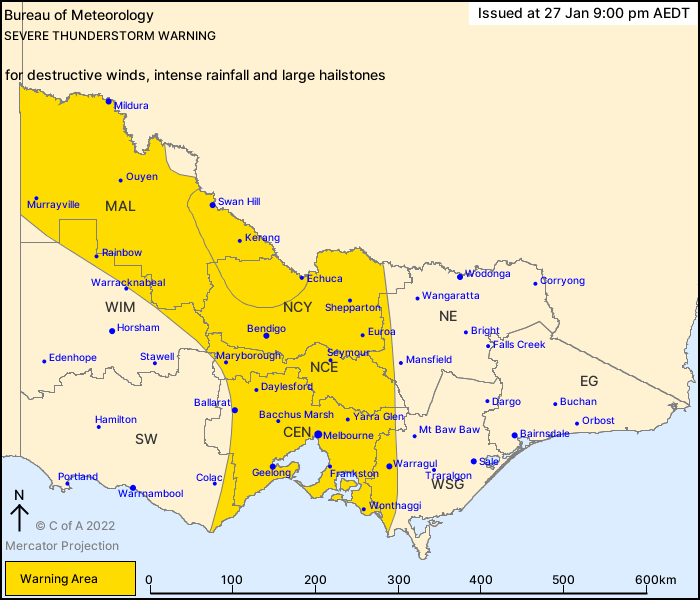