For people in East Gippsland and parts of North East and West and South Gippsland Forecast Districts.

HEAVY RAINFALL is likely to develop throughout East Gippsland and parts of W&S Gippsland today with widespread totals of 50-75mm expected. Isolated heavier falls of 90-120mm are possible which may lead to FLASH FLOODING, mainly about elevated areas.

Rainfall is likely to continue during Tuesday, with a further 30-50mm of rain and isolated falls of 50-70mm. Rain is most likely during the morning before easing into Tuesday afternoon as the low pressure system weakens.

A flood watch is also current for catchments in both East Gippsland and will be issued for West and South Gippsland.

Locations which may be affected include Dargo, Buchan, Mallacoota, Combienbar, Gelantipy and Bonang.

DAMAGING WINDS, averaging 55 to 75 km/h with peak gusts of around 100 km/h are expected

to develop this afternoon across Alpine areas.

The strongest gusts (up to 120 km/h) are expected between midnight Monday and 0700 Tuesday. The risk of damaging winds is generally confined to elevations above 1300 metres with peak gusts expected on exposed Alpine peaks. Winds should drop below warning threshold by late Tuesday morning.

Locations which may be affected include Falls Creek, Mt Hotham and Mt Buller. 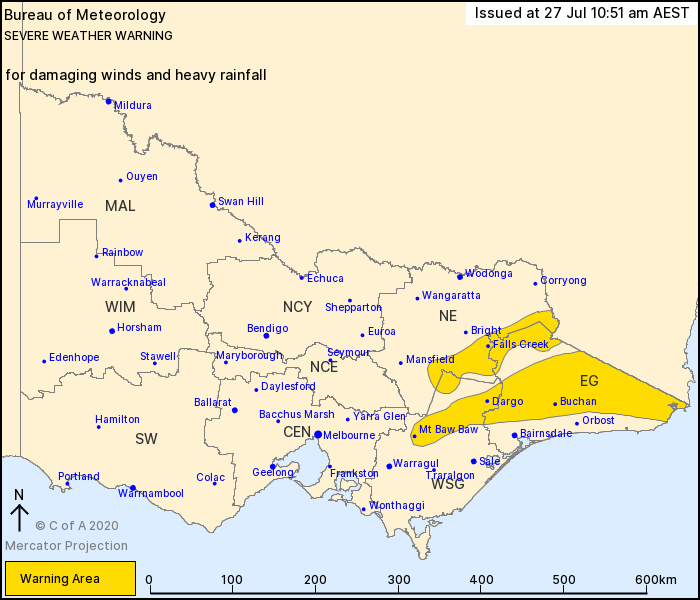