For people in East Gippsland and parts of West and South Gippsland Forecast Districts.

Heavy to INTENSE rainfall over parts of Gippsland during Sunday. Strong to damaging winds developing in the southeast during Sunday night.

Weather Situation: A low pressure system just to the east of Victoria will move slowly into eastern Bass Strait during Sunday, deepening in response to an upper trough.

HEAVY RAINFALL which may lead to FLASH FLOODING is forecast through East Gippsland and eastern parts of West and South Gippsland during Sunday. Six-hourly rainfall totals between 60 to 90mm are likely.

INTENSE RAINFALL which may lead to DANGEROUS AND LIFE THREATENING FLASH FLOODING is possible in East Gippsland, with six-hourly totals to 120mm possible with embedded thunderstorm and heavy shower activity.

Conditions are expected to ease early on Monday morning as the low tracks east, moving away from the coast into the Tasman Sea.

FLOOD WATCHES and WARNINGS are current for parts of Gippsland catchments. For details, please see www.bom.gov.au/vic/warnings/

Locations which may be affected include Dargo, Bairnsdale, Orbost, Gelantipy, Buchan, Mallacoota and Bonang.

24 hour rainfall totals to 9am on Sunday: 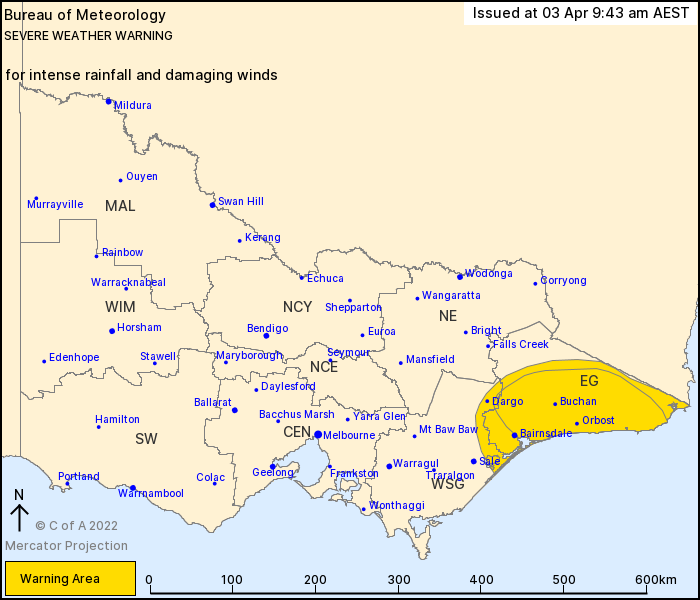