For people in East Gippsland and parts of North East and West and South Gippsland Forecast Districts.

DAMAGING WINDS, averaging 50 to 70 km/h with peak gusts of around 110 km/h are expected to develop late Monday over alpine areas.

Winds will strengthen on Monday evening, with the strongest gusts expected between midnight Monday and 0400 AEST Tuesday. The risk is expected to ease around dawn on Tuesday. Peak gusts are expected on exposed alpine peaks, generally limited to areas above 1300m elevation.

Locations which may be affected include Falls Creek and Mt Hotham.

HEAVY RAINFALL is likely to develop throughout East Gippsland during Monday, with widespread totals of 60-80mm expected during Monday. Isolated heavier falls of up to 110mm are also expected in the warning area which may lead to FLASH FLOODING. There is also a risk of landslides and debris flow.

Rainfall is likely to continue during Tuesday, with a further 30-50mm of rain possible, falling mainly during the morning. The threat of heavy rain eases on Tuesday afternoon as the low pressure system moves further into the Tasman Sea.

A flood watch is current for catchments in East Gippsland.

Locations which may be affected include Dargo, Buchan, Mallacoota, Combienbar, Gelantipy and Bonang. 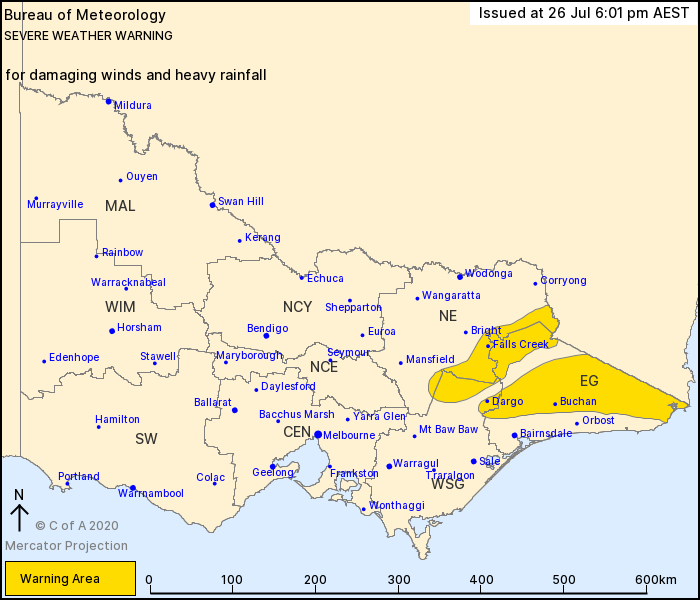