INTENSE RAINFALL FROM DANGEROUS THUNDERSTORMS IN THE AREAS AROUND MORAWA, MOORA, COOROW, AND BADGINGARRA

Weather Situation:
A humid and unstable airmass to the east of a surface trough near the west coast is producing severe thunderstorms this afternoon and evening, supported by a strong upper trough.

Severe thunderstorms are likely to produce INTENSE RAINFALL that may lead to dangerous flash flooding and damaging winds over the next several hours in parts of the Central West district. Locations which may be affected include Morawa, Moora, Coorow, and Badgingarra.

Severe thunderstorms are likely to produce heavy rainfall that may lead to flash flooding and damaging winds over the next several hours in the Central West and parts of the Pilbara, Gascoyne, Lower West and Central Wheat Belt districts. Locations which may be affected include Meekatharra, Moora, Mount Magnet, Newman, Wongan Hills and Yalgoo. Large hail is also possible with thunderstorms in the northeast Gascoyne and eastern Pilbara. Locations which may be affected include Newman, Jigalong, Mount Augustus and Nullagine.

Mount Magnet recorded 35mm of rainfall in the 2 hours to 3:15pm.

Yuna (northeast of Geraldton) recorded 18mm of rainfall in 20 minutes to 1:38pm. 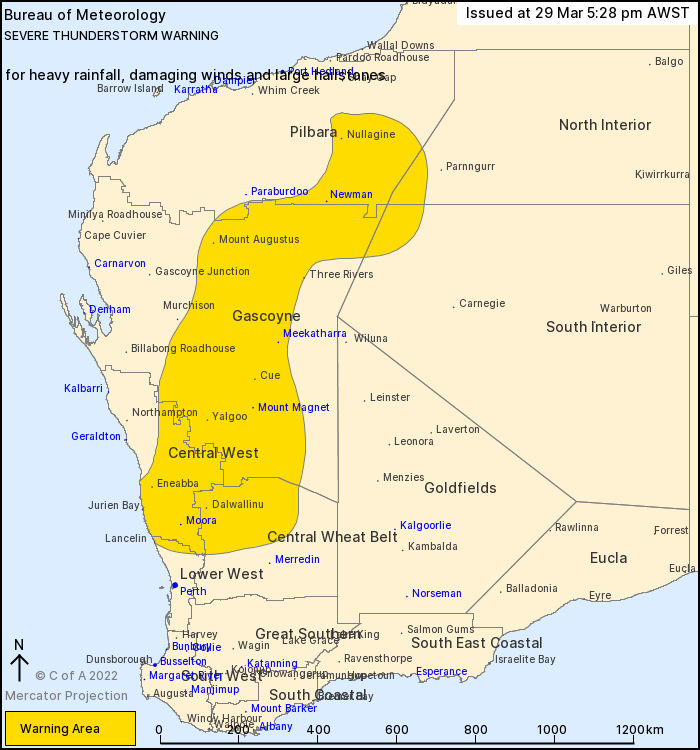