Issued at 11:27 am Sunday, 24 May 2020.
Widespread severe weather likely over western parts of WA with dangerous weather in some parts.

Weather Situation:
A tropical system is combining with a cold front and trough to produce a vigorous weather system that will affect the length of the west coast during today and Monday. A deep low pressure system is expected to pass near the South West of the state tonight and early Monday morning. There is the possibility of other lows forming along the trough as it impacts the west coast north of Jurien Bay during today. Dangerous weather may occur in some parts, particularly in the vicinity of the lows.

WIDESPREAD DAMAGING WINDS, averaging 60 to 70 km/h with peak gusts to around 100 km/h are likely and could cause DAMAGE TO HOMES AND PROPERTY. DAMAGING WINDS are occurring in coastal areas between Onslow and Lancelin, including Geraldton, Exmouth, Carnarvon and Denham. DAMAGING WINDS will extend to southwest of a line from Onslow to Meekatharra to Kalgoorlie to Esperance, including the Perth Metropolitan area, Mandurah, Bunbury, Busselton and Albany during this afternoon and evening.

Residents in coastal areas between Exmouth and Augusta are specifically warned of the
POTENTIAL OF A DANGEROUS STORM TIDE. Tides are likely to rise SIGNIFICANTLY ABOVE THE NORMAL HIGH TIDE MARK with DAMAGING WAVES and DANGEROUS FLOODING.
DAMAGING SURF CONDITIONS are likely which could cause SIGNIFICANT BEACH EROSION. DAMAGING SURF is expected to continue for coastal parts between Denham and Israelite Bay into Tuesday.

The following wind gusts have been recorded:
107 km/h at North Island (offshore from Geraldton) at 9.54am.
96 km/h at Geraldton airport at 11.04am.

This is a rare event for WA particularly due to the extent of the area affected and the possibility of multiple areas of dangerous weather. 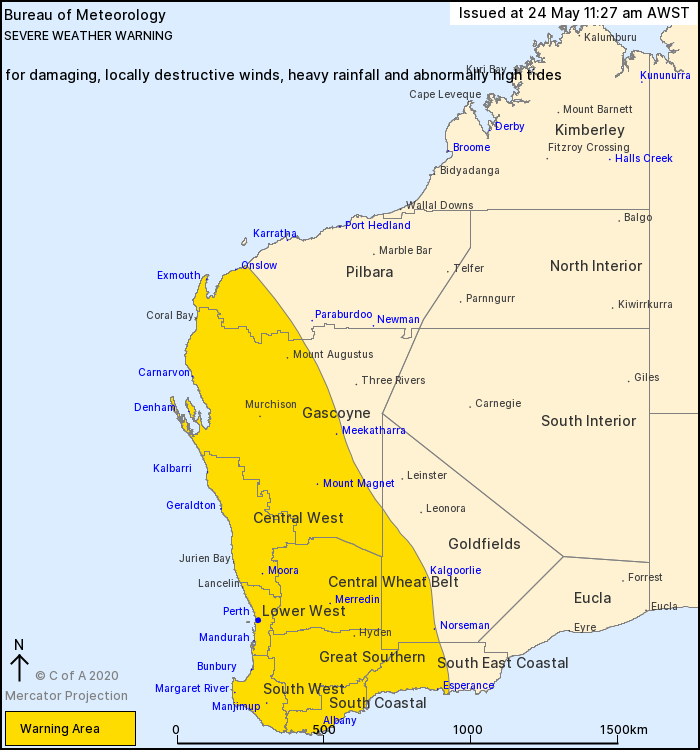