Weather Situation: A strong cold front will approach the southwest on Monday. Conditions will start to deteriorate across the Perth Metro area and southwest from Monday afternoon, extending northwards and eastwards overnight Monday. The strong cold front is expected to reach the far southwest early Tuesday morning before moving east across the South West Land Division during the day.

WIDESPREAD DAMAGING WINDS, averaging 60 to 70 km/h with peak gusts to around 120 km/h are likely and could cause DAMAGE TO HOMES AND PROPERTY.

Locally DANGEROUS WINDS, averaging 80 to 90 km/h with peak gusts of in excess of 125 km/h are possible and could cause SIGNIFICANT DAMAGE OR DESTRUCTION TO HOMES AND PROPERTY.

HEAVY RAINFALL which may lead to FLASH FLOODING may develop over the northern South West and southern Lower West districts, particularly near the Darling Scarp from mid afternoon on Monday. Moderate to heavy falls may occur elsewhere in the South West and Lower West districts as well as the west of the Great Southern on Monday afternoon and evening.

A Flood Watch is current for some catchments in the southwest. See http://www.bom.gov.au/wa/warnings/ for more information.

Tides are expected to be HIGHER THAN NORMAL on Monday and Tuesday between Lancelin and Bremer Bay. HIGHER THAN NORMAL TIDES may cause FLOODING OF LOW-LYING COASTAL AREAS with VERY ROUGH SEAS between the SW Capes and Israelite Bay on Tuesday.

DAMAGING SURF CONDITIONS are likely which could cause SIGNIFICANT BEACH EROSION between Jurien Bay and Walpole on Monday, extending along the south coast to Israelite Bay on Tuesday.

This front is expected to be windier than a typical front and is likely to produce the kind of weather that is only seen around twice a year in the southwest of WA. 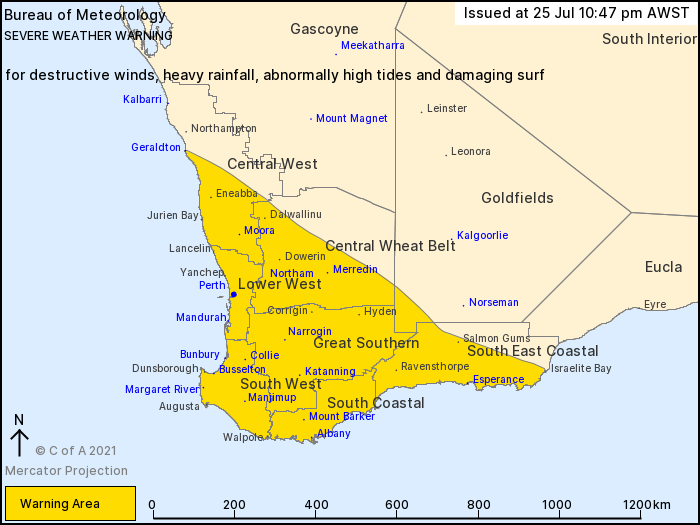