Wet and very windy start to the week for the southwest

Weather Situation: A strong cold front will cross the southwest during Monday morning followed by a vigorous and sustained westerly flow.

DAMAGING WINDS with gusts in excess of 100 kilometres per hour are likely and could cause DAMAGE TO HOMES AND PROPERTY. Winds across coastal areas of the Lower West and South West will strengthen on Monday morning and then extend further inland as the cold front traverses the South West Land Division.

Winds may temporarily ease for a period following the passage of the front, however further DAMAGING WINDS are likely later on Monday and during Tuesday as squally conditions persist.

DAMAGING SURF CONDITIONS are likely which could cause SIGNIFICANT BEACH EROSION along most of the west coast but particularly south of Shark Bay.

HIGHER THAN NORMAL TIDES may cause FLOODING OF LOW-LYING COASTAL AREAS with the morning high tide on Monday and Tuesday from Shark Bay to Albany including the Swan River.

HEAVY RAINFALL which may lead to FLASH FLOODING may develop during Monday morning with the passage of the front, particularly around the Darling Scarp. The rainfall will ease to squally showers and thunderstorms on Monday afternoon, continuing through Tuesday.

This front is expected to be windier than a typical front and is likely to produce the kind of weather that is only seen about 1-2 times per year. 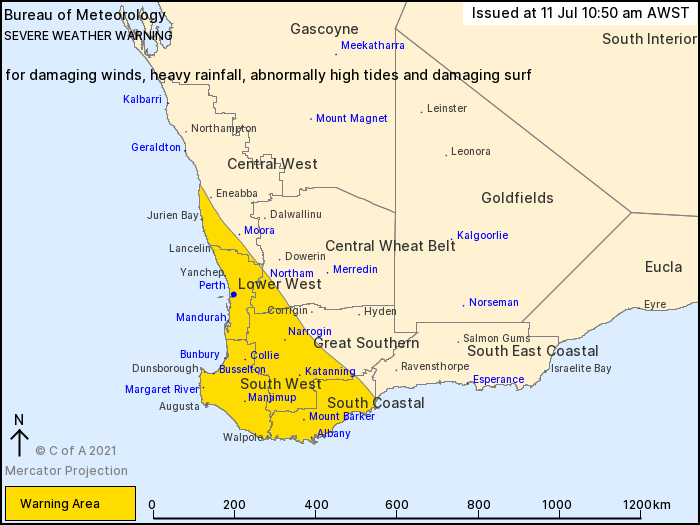