For people in parts of Kimberley, Pilbara, North Interior and South Interior districts.

Weather Situation: Ex-Tropical Cyclone Anika crossed the coast near Wallal and has weakened below cyclone intensity. At 5am WST Wednesday Ex-Tropical Cyclone Anika was located near 20.4S 121.2E, about 270 km east of Port Hedland and 90 km southeast of Wallal, moving southeast at 13 km/h. It is expected to weaken further as it moves through the east southeast Pilbara during Thursday. From Friday morning Anika is forecast to weaken over the WA interior.

HEAVY RAINFALL which is expected to lead to flash flooding is currently occurring near the system centre, in the area between Pardoo and Bidyadanga and the adjacent inland areas, extending to the Interior from early Thursday. Six-hourly rainfall totals between 50 to 150mm are likely today. 24-hour rainfall totals of up to 200mm are possible, but becoming less likely as the low moves further inland.

DAMAGING WIND GUSTS with peak gusts of around 110 km/h are likely near the system centre and with thunderstorms over the eastern Pilbara, extending into the Interior later today as the system moves towards the southeast.

Flood watches and warnings are current for the area. See http://www.bom.gov.au/wa/warnings/ for more information.

Locations which may be affected include Pardoo Roadhouse, Parnngurr, Sandfire, Shay Gap, Telfer and Wallal Downs. 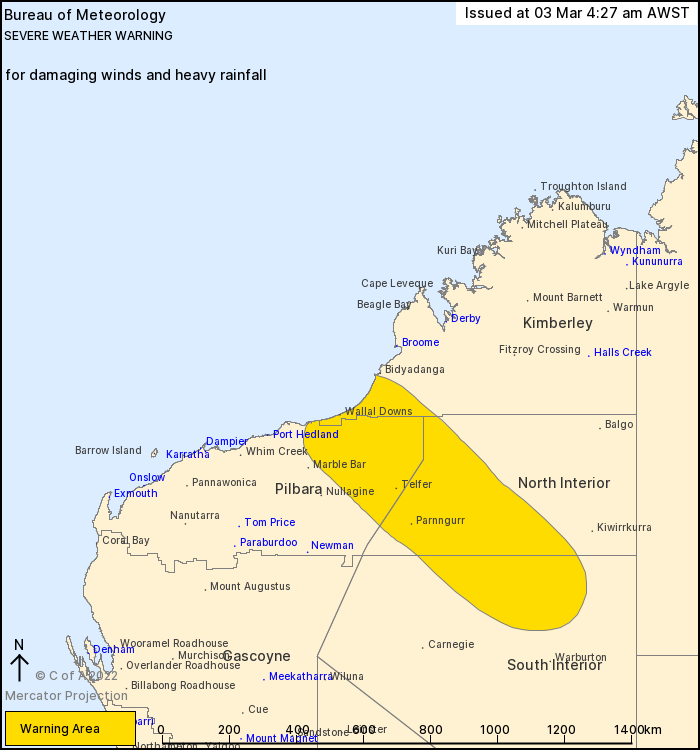