For people in parts of South Coastal and South East Coastal districts.

Weather Situation: A cut off low is located over the southwest corner of the state and is expected to drift northeast during Monday and Tuesday. The low is producing a persistent band of rain and thunderstorms along the south coast.

HEAVY RAINFALL which may lead to FLASH FLOODING is expected during Monday.

Currently heavy rainfall is occurring in coastal parts between Hopetoun and Bremer Bay. Heavy rainfall is expected to extend east through the remaining of the warning area overnight and into Tuesday.

In the past 6 hours Bremer Bay has recorded 48 mm of rain.

HIGHER THAN NORMAL TIDES may cause FLOODING OF LOW-LYING COASTAL AREA between Albany and Esperance.

DAMAGING SURF CONDITIONS are likely which could cause SIGNIFICANT BEACH EROSION between Albany and Esperance. The prevailing swell direction will be from the southeast, this is an unusual swell direction along the south coast. This may expose areas of the coastline to large waves that do not usually experience large swells.

Locations which may be affected include Albany, Esperance, Bremer Bay, Hopetoun and Salmon Gums.

This is an unusual weather event in that heavy rain will be persistent in the same location over the next 24 hours and that the swell direction along the south coast will approach from a different direction than is normal. 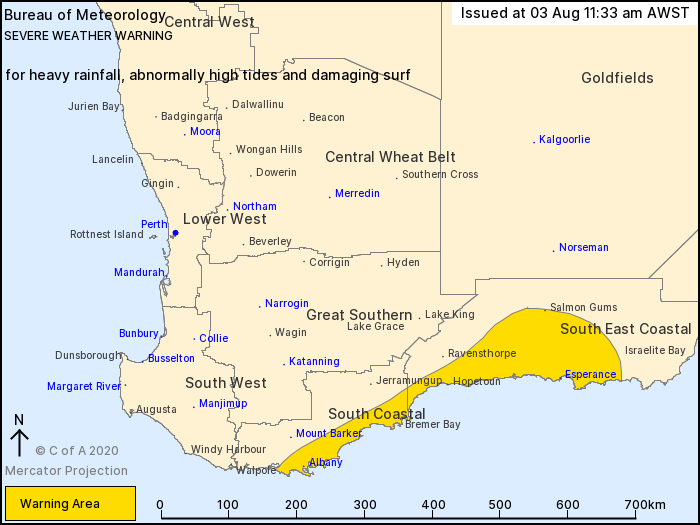