WA Tropical Cyclone Warning: Broome to Pardoo, Not Including Broome

Headline:
Ex-Tropical Cyclone Anika remains as a tropical low, moving south southwest along the west Kimberley coast. It may produce gales near the coast between Wallal and Bidyadanga later today.

Areas Affected:
Warning zone: Broome to Pardoo, not including Broome.

Ex-Tropical Cyclone Anika is moving along the coast, south of Broome. Despite its close proximity to land, it may produce gales along the coast later today.

The system will struggle to intensify to a cyclone, unless it takes a more westerly track and spends more time over open water during the day. The chance of this happening is low, but a period of gales on the coast is still possible..

Hazards:
GALES with gusts to 100 kilometres per hour could occur between Broome and Wallal Downs (not including Broome) later today. If the system takes a more westerly track, then it's possible for gales to extend along the coast to Pardoo. Gales are not expected to extend too far inland.

HEAVY RAINFALL is possible along the coast and over adjacent inland areas tonight and on Thursday as the tropical low moves inland.

ABNORMALLY HIGH TIDES are expected between Wallal Downs and Bidyadanga over the next few days, but this is not related to ex-TC Anika.

BLUE ALERT For people in or around Broome not including Broome to Wallal
Downs, including Bidyadanga. You need to prepare for cyclonic weather and organise an emergency kit including first aid kit, torch, portable radio, spare batteries, food and water.

ALL CLEAR Beagle Bay to Broome, including Broome.

Remaining people in the West Kimberley and East Pilbara Regions are advised to stay up to date with weather warnings and forecasts. 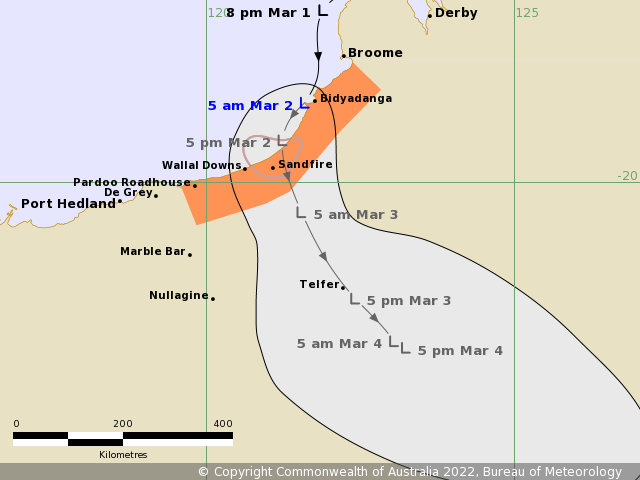