Inland parts of the Pilbara and northeast Gascoyne, including Tom Price, Paraburdoo and Mount Augustus but not including Newman.
Watch Zone

parts in or near Pannawonica.
Details of Tropical Cyclone Damien at 5:00 am AWST:

Location: within 55 kilometres of 22.2 degrees South 117.4 degrees East, estimated to be 115 kilometres north northwest of Paraburdoo and 175 kilometres south southeast of Karratha.

Tropical Cyclone Damien will continue to weaken as it moves further inland.
Hazards:

DESTRUCTIVE winds are near the cyclone centre, but will ease in the next couple of hours.

GALES are occurring over parts of the central Pilbara, including Tom Price, and will extend further inland towards southern parts of the Pilbara and northeast Gascoyne, including Paraburdoo and Mount Augustus, during Sunday morning and afternoon.

GALES are no longer occuring near Pannawonica.

Heavy rain is likely to cause flooding in the Pilbara and Gascoyne as the cyclone moves inland. Flood Watches and Warnings are current, please refer to http://www.bom.gov.au/wa/warnings/ for further details.
Recommended Action:

RED ALERT effective as of 0530hrs 9th Feb 2020: People in or near Whim Creek to Mardie (not including Mardie) and south to Pannawonica (including Pannawonica, Whim Creek, Point Samson, Cossack, Wickham, Roebourne, Karratha and Dampier) need to remain in or go to shelter immediately.

ALL CLEAR WITH CAUTION: Wallal Downs to Yule River including Nullagine, Marble Bar, Port Hedland, Barrow Island, Onslow, Mardie and to Fortescue (not including Fortescue) following the passing.

Communities in the Cyclone Warning zone should continue to monitor advice issued as changes to alerts and warnings may occur.

While warning areas are being contracted, lifting the Red Alert to affected communities will only occur when initial risk assessments have been completed. 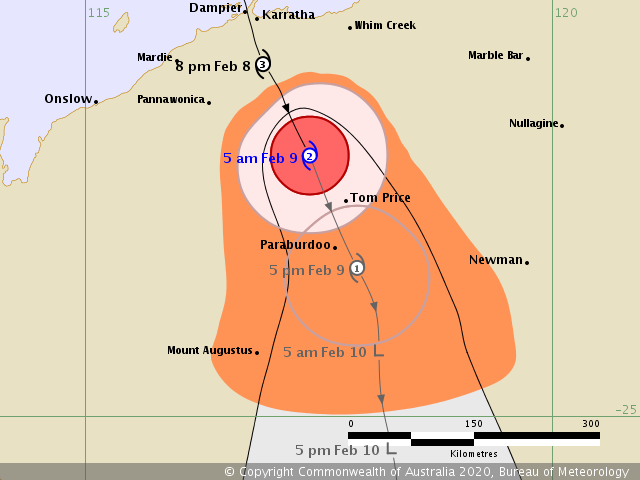