Details of Tropical Cyclone Seroja at 8:00 am AWST:

Movement: southwest at 18 kilometres per hour.

Tropical Cyclone Seroja is forecast to gradually intensify as it tracks to the southwest over open waters today and then to the south on Saturday. On Sunday, Seroja is expected to turn to the southeast and accelerate towards the west coast before making landfall late Sunday or early Monday between Carnarvon and Jurien Bay.
Hazards:

GALES with gusts in excess of 90 kilometres per hour are likely to develop in an area between Coral Bay and Lancelin during Sunday afternoon and evening. Gales will extend inland into the Wheatbelt and southern Goldfields during Monday.

DESTRUCTIVE WINDS with gusts in excess of 125 kilometres per hour are forecast to occur closer to the centre of Seroja as it moves across the coast and into the Wheatbelt.

HEAVY TO INTENSE RAINFALL and FLASH FLOODING are likely close to the track of Seroja during Sunday and Monday.

ABNORMALLY HIGH TIDES could cause minor flooding at the coast between Coral Bay and Lancelin, increasing to be SERIOUS FLOODING in the Denham and Shark Bay region.
Recommended Action:

BLUE ALERT: People in or near Coral Bay to Lancelin need to prepare for cyclonic weather and organise an emergency kit including first aid kit, torch, portable radio, spare batteries, food and water.

Communities between Coral Bay to Lancelin should listen for the next advice. 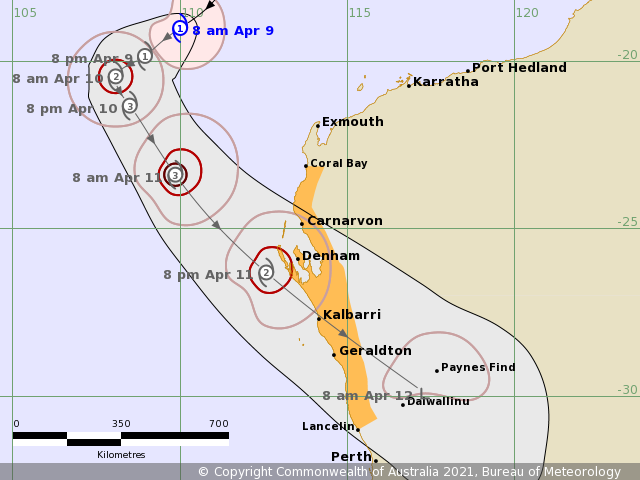