DAMAGING WINDS AND SURF ALONG THE COAST SATURDAY.

Weather Situation: A low pressure system currently in the southern Tasman Sea east of Bass Strait is deepening and moving northwards, producing a surge of southerly winds around its western flank. This surge of winds will increase the risk of damaging winds about the NSW coastline during today, in addition to large, powerful and damaging surf conditions.

DAMAGING WINDS, averaging 60 to 70 km/h with peak gusts in excess of 90 km/h are possible from early this morning along the south coast, shifting up the coastline into this afternoon and evening. Wind gusts are likely to be associated with showers and thunderstorms pushing over the coastal fringe.

Winds are expected to ease below the damaging criterion from the south of the warning area by later this afternoon, before easing by this evening.

VERY HEAVY SURF which may lead to localised damage and coastal erosion is possible for beaches south of Seal Rocks. Beaches at highest risk will be those orientated south to southeast.

A hazardous surf warning has also been issued for today for the coastline south of Coffs Harbour and between Point Perpendicular and Cape Byron for Sunday. 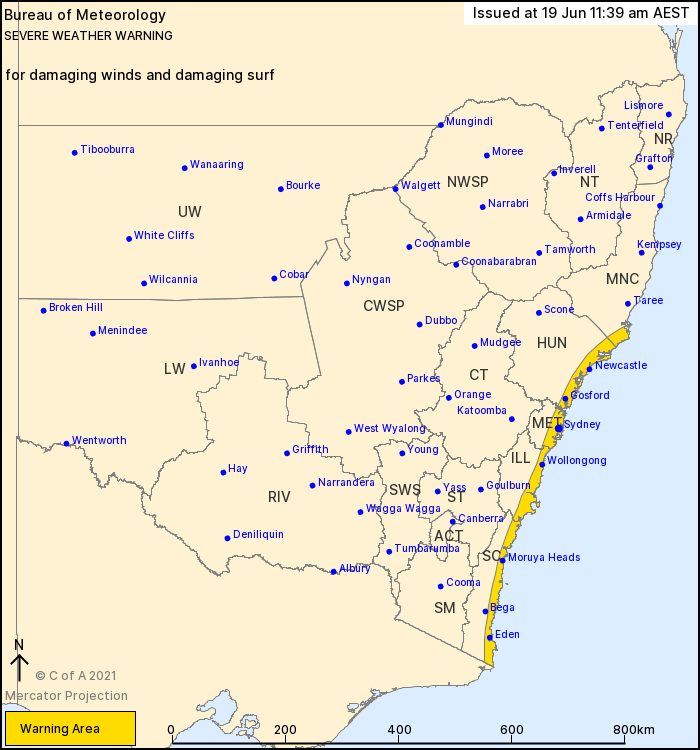