Weather Situation: A low pressure system off the southern NSW coast is directing a strong south to southeasterly flow over Victoria
DESTRUCTIVE WIND GUSTS exceeding 125km/h are possible about the central highlands until around dawn Thursday morning, near the top of the dividing range, Mt Macedon and a short distance north of the divide.
Locations which may be affected include Kyneton, Daylesford and Seymour.
DAMAGING SOUTH to SOUTHEASTERLY WINDS, averaging 50 to 60 km/h with peak gusts of 100 km/h, are expected over remaining parts of the warning area, including the Melbourne metropolitan area.

Winds are likely to average 60 to 70 km/h tonight through to THURSDAY morning about the southern Gippsland coast, Port Phillip, the Gippsland Ranges and the Central Ranges, with peak gusts reaching around 110 km/h. Peak gusts about the ranges are expected to reach 120 km/h during the same period.
BLIZZARD conditions are possible about the alpine peaks late WEDNESDAY and THURSDAY morning.

Damaging winds will contract to southern parts of Gippsland and the Central Highlands during Thursday morning before easing below warning thresholds by early Thursday afternoon.
A separate Severe Weather Warning for Heavy Rainfall is also current for West and South Gippsland and parts of Central, North Central and North East Forecast Districts

Locations which may be affected include Melbourne, Bendigo, Seymour, Maryborough, Ballarat, Geelong and Traralgon.

Severe weather is no longer occurring in the East Gippsland district and the warning for this district is CANCELLED. 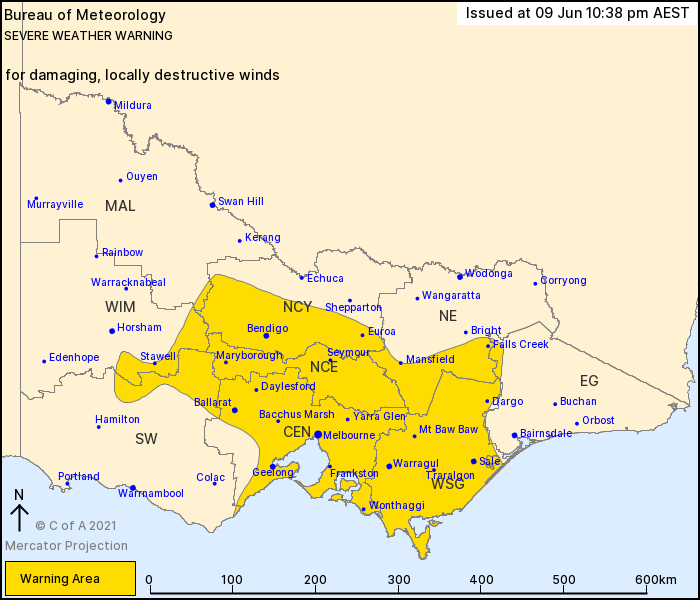