For people in parts of Central, South West and North Central Forecast Districts.

Weather Situation: An upper trough will move over Victoria during the early hours of Tuesday.

DAMAGING SOUTHERLY WINDS, averaging 40 to 60 km/h with peak gusts of around 80 to 90 km/h are likely over western parts of the Central Highlands from around 3 am on Tuesday morning. Winds will begin to ease later on Tuesday morning and be below warning threshold by the middle of the day.

Locations which may be affected include Maryborough, Castlemaine, Kyneton and Daylesford.

HEAVY RAINFALL which may lead to FLASH FLOODING is possible about parts of the southwest, central and north central districts.

Currently heavy rainfall is occurring about the surf coast, this area is expected to move inland towards western parts of the central forecast district and outer western and northwestern suburbs of Melbourne.

the heaviest rainfall will ease during the morning, with the risk of flash flooding easing by dawn.

Aireys Inlet has received 69mm of rain since 9am (50mm of which occurred over a one hour period).

Locations which may be affected include Kyneton, Daylesford, Ballarat, Geelong and Bacchus Marsh. 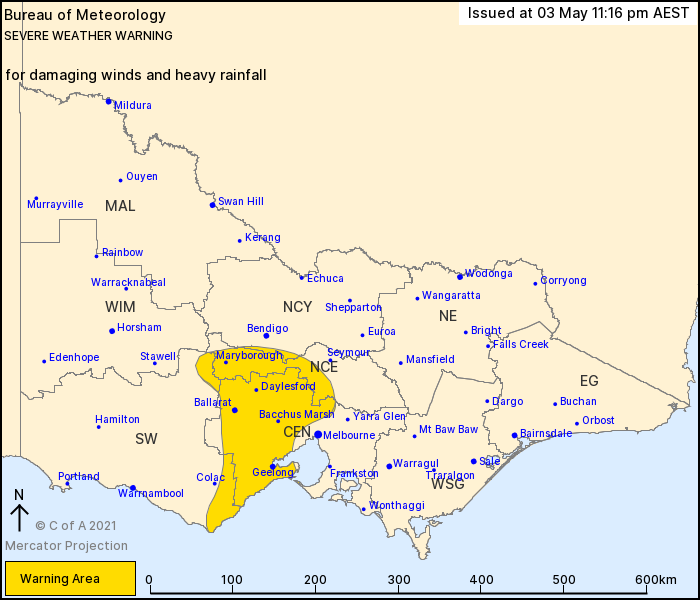