Weather Situation: A low pressure system developing off the southern NSW coast will rapidly deepen near the East Gippsland coast on Wednesday night.
DAMAGING SOUTH to SOUTHEASTERLY WINDS, averaging 50 to 60 km/h with peak gusts of 100 km/h, will extend over central and eastern parts of the warning area during WEDNESDAY afternoon and evening, including the Melbourne metropolitan area. The strongest winds are expected overnight tonight.
Winds are likely to average 60 to 70 km/h overnight WEDNESDAY into THURSDAY about the southern Gippsland coast, Port Phillip, the Gippsland Ranges and the Central Ranges, with peak gusts reaching around 110 km/h. Peak gusts about the central highlands and western Alpine peaks are expected to reach 120 km/h during the same period.
BLIZZARD conditions are possible about the alpine peaks late WEDNESDAY and THURSDAY morning.

Damaging winds will contract to southern parts of Gippsland during Thursday morning before easing below warning thresholds by early Thursday afternoon.

Locations which may be affected include Melbourne, Bendigo, Seymour, Maryborough, Ballarat, Geelong and Traralgon. 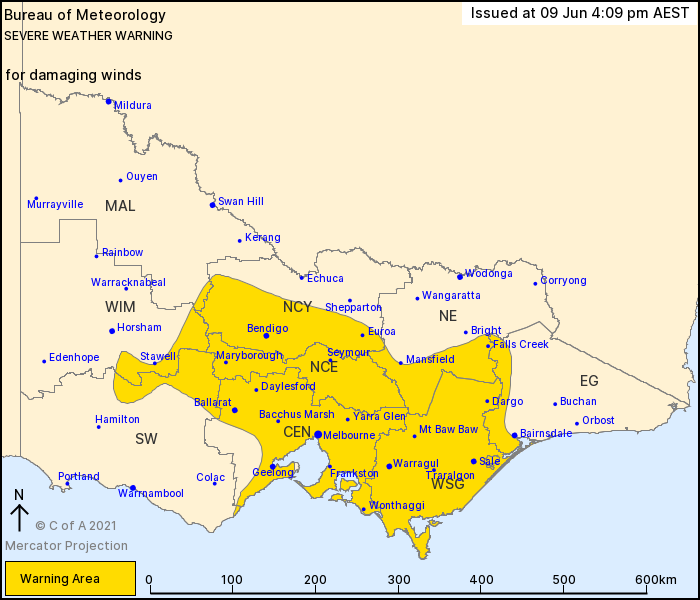